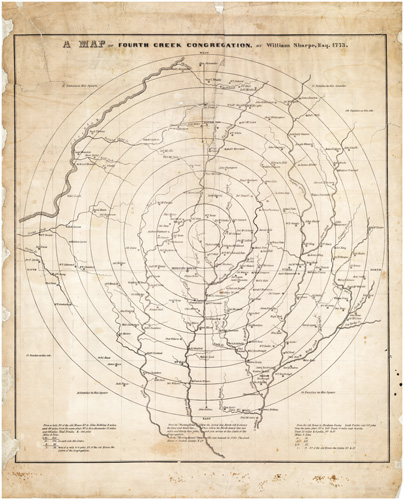 (Little Gabriel) William Stevenson, the original ancestor of an American family that produced two vice-presidents of the United States and a nominee for the office of president, was born in Antrim County, province of Ulster, Ireland. His father, Robert, had migrated to Ireland from Scotland in the early 1700s. William's education consisted of a seven-year apprenticeship to a tailor, which prevented him from leaving for America with his widowed mother and siblings in the early 1740s. Once he had completed the apprenticeship, he joined the family in present Washington County, Pa., in 1748.

William had changed the spelling of the family name from Stephenson to Stevenson by about 1780. He was the ancestor of Vice-presidents Adlai Stevenson I (1892–96) and Alban Barkley (1948–52). Adlai Stevenson I was the grandfather of the late Adlai E. Stevenson II, who was the governor of Illinois, a Democratic nominee for the office of president of the United States (1952 and 1956), and later ambassador to the United Nations. Governor Stevenson was the father of Adlai E. Stevenson III, a U.S. senator from Illinois. There is reason to believe that William Stevenson's nephew, George Stephenson, was the Englishman, George Stephenson (1781–1848), who contributed much to the success of the steam locomotive. On a few occasions the American Stevensons claimed that George Stephenson was "some of our people."

William Stevenson married Mary McLelland, also a Scots-Irish immigrant, in the early 1750s, and moved from Pennsylvania to Rowan County in 1762. He received a grant of 369 acres from Earl Granville in present-day Iredell County. Best remembered in his community for being a devout Christian of the Presbyterian faith, he was among the first board of elders elected to the Fourth Creek Presbyterian Church (now the First Presbyterian Church of Statesville). In prayer he impressed others with his fervor and, like the Angel Gabriel, appeared to be speaking directly to God. This boldness accounts for his receiving the title of Little Gabriel, by which he was widely remembered. A great-grandson, Adlai E. Stevenson I, who visited Statesville one hundred years later (1876), declared in a letter to his mother that the expression "Little Gabriel" was well known because "they talk about 'Little Gabriel' as familiarly in Statesville as if they had seen him day before yesterday." Perhaps the most notable instance of his power of prayer came when he prayed that the "deaf and dumb" spirit would depart from his beloved paster, the Reverend Dr. James Hall, so that Hall could again be able to "hear the promises of the Word and preach the gospel to this dying people." Following Elder Stevenson's prayer, which "touched many hearts," Hall resumed his preaching.

In 1896 Stevenson was described as a man of "low stature" whose character exhibited a "quiet self assured manner." He spoke with a "soft, clear, far-carrying voice" according to great-grandson Andrew P. McCormick, who was then a district federal judge in Texas. McCormick said that his great-grandfather prospered in "his basket and store." Over the years Stevenson increased his land-holdings to nearly 3,400 acres, which included part of the land on which the modern city of Statesville is located. He acquired slaves but apparently did not aspire to hold public office.

William and Mary Stevenson had twelve children, most of whom settled in Iredell County. They included Thomas, John, William, Mary, James, Joseph, Mary, Robert, Moses, Jane, Nancy, and Elizabeth. The two Marys died in infancy, and Thomas was killed in the Revolutionary War while a soldier in the Continental army. The third son, William, participated in the Battles of Cowan's Ford and Guilford Court House. Their fourth son, James, was the ancestor of the three descendants who later bore the name of Adlai Ewing Stevenson. The youngest daughter, Elizabeth, was the ancestor of Vice-President Alban Barkley.

William Stevenson died during the spring of 1809 and was buried in the Fourth Creek Burying Ground, Statesville.

Samuel Harris Stevenson and others, A History and Genealogical Record of the Stevenson Family from 1748 to 1926 (1926). https://archive.org/details/historygenealogi00stev, (accessed December 19, 2013).