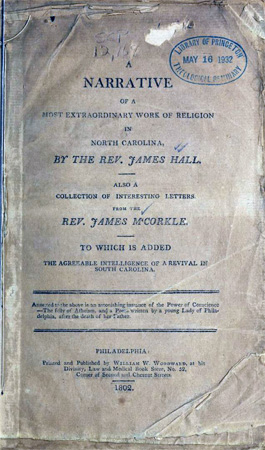 James Hall, clergyman, was born in Carlisle, Pa., to James and Prudence Roddy Hall. James, Sr., a Scotch-Irish immigrant, arrived in America with his father prior to 1723. In 1751, the Halls migrated to North Carolina, settling among the Bethany Presbyterian congregation near Fourth Creek (later Statesville). James, Jr., received a local education, although he may have attended Crowfield Academy near Centre Church. Influenced by his pious home community and by itinerant preachers, he vowed to consecrate his life to the ministry. His preparation for a clerical career was delayed when his father's health faltered. As the oldest son at home at the time, the third of at least five brothers, James shouldered the burden of principal provider until the younger children matured. Sometime during that period, he was engaged to marry. Subsequently he became convinced that a wife would prevent his fulfilling his vow of total dedication to God's service, so he broke the engagement and never married.

As soon as circumstances permitted, Hall entered the College of New Jersey at Princeton, where he studied theology under John Witherspoon and was graduated in 1774. After declining a mathematics professorship there because of his vow, he returned to North Carolina. In late 1775 or early 1776 the Orange Presbytery licensed him to preach, and in the latter year he received a call to Fourth Creek Presbyterian Church. On 8 Apr. 1778 he was ordained by the Orange Presbytery and installed as pastor of the Fourth Creek, Bethany, and Concord congregations, a parish that encompassed roughly 600 square miles.

During the Revolutionary War Hall subordinated his patriotic impulses to his pastoral obligations. However, when immediate threats to the backcountry reconciled the two responsibilities, he helped organize irregular militia units and participated in expeditions against the British. In 1779, outraged by British depredations in South Carolina, he raised a company from his congregation and was captain during an incursion into the western part of that state. Later, he joined a two-month march into Georgia's Cherokee country and, as chaplain, preached the first gospel sermon in the area. In 1781, he was again drawn away from his ministerial duties when General William Lee Davidson appealed to him to help muster opposition to the advancing Lord Cornwallis. Hall reorganized his company and joined Davidson for the skirmish at Cowans Ford. Of an imposingly tall, muscular physique and a dark, forceful personality, Hall was offered command of the militia force after Davidson was killed but he declined.

After the war Hall intensified his activities within his wide parish and broadened them to affect the National Presbyterian Church. Shortly after hostilities ended, he fostered a two-year revival during which 140 communicants joined his congregation. His fervid efforts severely strained his health. In 1786, he undertook a therapeutic sea voyage to New York, with excellent results. In New York he attended a meeting of the New York–Philadelphia Synod, which then held jurisdiction over North Carolina churches, and he helped organize the General Assembly of the Presbyterian Church. He represented the Orange Presbytery and later the Concord Presbytery a total of sixteen times at general assembly meetings and moderated the 1803 conclave. In 1788, Hall helped form the Synod of the Carolinas. He attended all but one of its annual meetings, until it was superseded by the Synod of North Carolina in 1813, serving as moderator in 1812. He remained active in the North Carolina synod until infirmity precluded his involvement after 1819. During the decade 1810–20 he assisted in the formation of the American Bible Society and the North Carolina Bible Society, serving as first president of the latter.

As early as 1790 Hall relinquished his pastorates at Fourth Creek and Concord to free himself for wide-ranging missionary work. In 1793, he began journeying to the west and southwest, eventually making fourteen extended expeditions as well as numerous shorter trips. On his most notable journey he established the first Protestant mission in the lower Mississippi valley, at Natchez, in 1800. After his return from Mississippi, he wrote a series of newspaper articles providing the most detailed description of that region by an American to that time. In 1801, he collected the articles as A Brief History of the Mississippi Territory. The following year he published another book, A Narrative of a Most Extraordinary Work of Religion in North Carolina, reflecting his own role as a fervent leader of the camp meeting revivals sweeping the western part of the state. Differing from those of his colleagues who rejected the revivals' emotionalism as satanic, Hall insisted that the movement was transforming public morals for the better and disseminating truly Christian godliness. 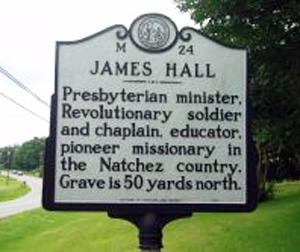 To his religious concern, Hall conjoined an educational concern. As a young pastor, he established a school called Clio's Nursery and an Academy of the Sciences in his Bethany home. He personally provided a classical education and a background in theology for numerous westerners who later attained prominence in North Carolina Presbyterianism, including John Makemie Wilson, Humphrey Hunter, James McIlheny, John Robinson, and Andrew Flinn. There are indications that Hall was the author of an English grammar for his students' use, which was circulated widely in manuscript form and was later published. He worked heartily on behalf of his alma mater and The University of North Carolina, each of which conferred upon him an honorary D.D. He was instrumental in raising the endowment for Princeton Theological Seminary and bequeathed the seminary 250 acres in Tennessee. He also donated some sixty volumes to The University of North Carolina Library.

During the period of his most extensive activity, Hall retained his pastorate at Bethany, and he remained titular pastor there until his death. Throughout his career he had exhibited manic-depressive symptoms which apparently emanated from an inconsistently repressed, ineradicable insecurity about his personal salvation; at one point he refused to preach for a year and a half, until an elder symbolically exorcised a "deaf-and-dumb demon" from him. His depressive tendency dominated his last seven years as his inescapable final judgment drew near. Hall was buried in the Bethany churchyard. At least one of his published sermons survives, A Sermon preached at the ordination of Mr. Samuel C. Caldwell, as Pastor of Sugar Creek Church (1792).

Jethro Rumple, The History of Presbyterianism in North Carolina (1966).

Hall, James; McCorkle, James. A narrative of a most extraordinary work of religion in North Carolina, by the Rev. James Hall : also a collection of interesting letters from the Rev. James M'Corkle ; to which is added the agreeable intelligence of a revival in South Carolina. Philadelphia : William W. Woodward. 1802. https://archive.org/details/moste00hall (accessed December 16, 2013).

Hall, James; McCorkle, James. A narrative of a most extraordinary work of religion in North Carolina, by the Rev. James Hall : also a collection of interesting letters from the Rev. James M'Corkle ; to which is added the agreeable intelligence of a revival in South Carolina. Philadelphia : William W. Woodward. 1802. https://archive.org/stream/moste00hall#page/n0/mode/2up, (accessed December 16, 2013).