Richard Sterling, educator, publisher, and mayor, was born in County Down, Ireland. When he was twelve, his parents immigrated to the United States and settled in Newburgh, N.Y. He received an A.M. degree from Princeton University in 1835 and for the next thirteen years taught school in Fredericksburg and Richmond, Va. In Fredericksburg he married Marion L. Howison, the daughter of Samuel Howison. Their children were Samuel Graham (d. 1852), Helen Mary (d. 1855), and R. O. Sterling.

After teaching natural philosophy and chemistry at Hampden-Sydney College (1848–51), Sterling moved to Greensboro, N.C., to become the principal of the Edgeworth Female Seminary. While serving in that position from 1851 to 1864, when the school was closed because of the Civil War, he was also the professor of belles lettres and physical science. According to the Greensboro Times of 2 Apr. 1869, "Professor Sterling is a ripe scholar and enjoys an enviable reputation as an instructor—the best testimonial of which is the fact that during the whole of his charge of Edgeworth the school was always filled with scholars and was considered inferior to no institution in the south."

In addition to his teaching duties, Sterling was active in civic and business affairs. In 1852 he was one of the founders of the Greensboro Mutual Life Insurance and Trust Company. During the wartime administration of Governor Zebulon B. Vance, he served on the State Literary Board, which worked to establish public schools. In 1864 he was elected mayor of Greensboro, a post he held until Colonel William L. Scott, a former Edgeworth Female Seminary teacher (1852–54), took over as military mayor in 1865. 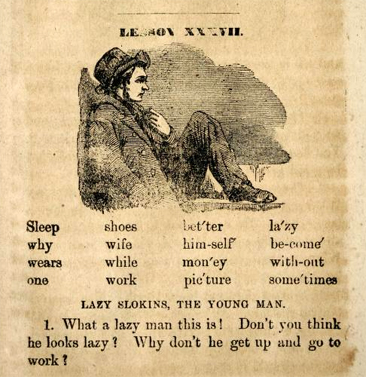 When the Civil War started in 1861, Sterling and J. D. Campbell, a teacher at the Edgeworth Female Seminary, wrote a series of textbooks entitled Our Own First Reader, Our Own Second Reader, Our Own Third Reader, Our Own Fourth Reader, Our Own Fifth Reader, Our Own Primer, and Our Own Spelling Book. With James W. Albright, Sterling and Campbell formed the publishing firm of Sterling, Campbell, and Albright, Book Publishers and Printers. They sent J. J. Ayers, a Frenchman, to Liverpool, England, to obtain stereotypes, which were brought to North Carolina on the Advance, a Confederate blockade-runner. Using paper from the Salem and Wake Forest mills, they published the Our Own Series as well as other southern textbooks and printed information for nearby county governments. All of the books were copyrighted by the Confederate States of America and used throughout the South. When the Civil War ended, the publishing firm was closed by the federal government because the textbooks offered a "Bible View of Slavery," which explained biblical teachings in support of slavery. In 1866 Sterling and his son opened the publishing business and bookstore of R. Sterling and Son.

While living in Greensboro, Sterling was an active member of the First Presbyterian Church. He served as an elder of the church (1863–68) and as a delegate to the Orange Presbytery (1863) in Milton. In 1865 the First Presbyterian Church opened a Sabbath School for freedmen, and Sterling was appointed to find teachers for the school. During 1867 he was the superintendent of the Sabbath School for former slaves.

Early in 1868 he became the head of the Shelbyville Female College in Shelbyville, Ky. Two years later he moved to Paris, Tenn., where he was principal of a female seminary for three years. In 1873 he opened a boarding school in Evansville, Ind. Returning to North Carolina in 1875, he was principal of the Episcopal Boys School in Mocksville. In June 1881 he became the superintendent of the Davie County schools and served until November 1882. Sterling was buried in the Mocksville First Presbyterian Church cemetery.

A Bill to Incorporate the Greensboro Mutual Life Insurance and Trust Company (1852).

James W. Wall, History of Davie County (1969) and A History of the First Presbyterian Church of Mocksville (1963).

Sterling, Richard.; Campbell, J.D. Our own second reader: for the use of schools and families. Greensboro, N.C.: Sterling, Campbell, and Albright. 1863. 64. https://archive.org/details/ourownsecondread00ster (accessed April 28, 2014).

Richard Sterling died in Mocksville, Davie County, NC, on 3 October 1883. He is buried in the old Joppa Cemetery. I am compiling their family history. Marion died 24 October 1868 in Shelbyville, Kentucky. On FindAGrave, #103280944, there is a grave "M. Sterling" that is probably hers. It is very difficult to read. This is the only Sterling grave in that town. They had 9 children, and I'm attempting to learn more about them. Richard's daughter, Mattie Thorburn Sterling married Thomas Lemuel Kelly. They are both buried at Joppa, along with his second wife.

Thanks for your comments!  I

Thanks for your comments!  I am forwarding your question to our referene department.