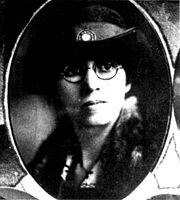 Lillian Exum Clement Stafford, legislator and attorney, was born near Black Mountain in Buncombe County, the sixth child of George Washington and Sara Elizabeth Burnett Clement. Young Exum Clement received her formal education in Black Mountain until the family moved to Biltmore, where her father was working on the construction of Biltmore House. There she attended the private school of All Souls' Parish, the Normal and Collegiate Institute, and Asheville Business College. She then worked as office deputy in the Buncombe County sheriff's office and in her spare time studied law under James Jefferson Britt and Robert G. Goldstein. In 1916 she passed the state bar exam, winning a prize for one of the highest grades.

Miss Clement began practicing law in Asheville in 1917 and in the next four years became known as a capable criminal lawyer. During World War I she served as chief clerk of the Buncombe County draft board.

"Brother Exum," nominated by males before women were enfranchised, was the Buncombe County Democratic candidate to the state legislature in 1920. Based on her ability, dedication, and other qualifications, she was elected by a landslide (10,368 to 41), becoming North Carolina's first female legislator. An active representative, she introduced about seventeen bills, most of which passed. These included a measure prohibiting railroads from hiring illiterates for certain positions, one providing for the secret ballot, the "pure milk bill" requiring tuberculin testing of dairy herds, and a bill reducing the time of abandonment necessary for divorce. Miss Clement was especially interested in getting the state to assume control of the Lindly Training School for unwed mothers and delinquent girls, located near Asheville.

In 1921, at St. James's Episcopal Church in Hendersonville, Exum Clement married E. Eller Stafford, a staff writer and telegraph editor of the Asheville Citizen . They became the parents of a daughter, Nancy. After her marriage Mrs. Stafford was never again a candidate for public office, though she returned to Raleigh for a special legislative session in 1921. Governor Cameron Morrison appointed her a director of the state hospital at Morganton, a position she held until her death.

She was one of the founders of the Asheville Business and Professional Women's Club and was active in the United Daughters of the Confederacy. In addition, she enjoyed hiking in the mountains and knew a great deal about plants and animals of her region.

In January 1921 "Brother Exum" told a Raleigh News and Observer reporter: "I am by nature a very timid woman and very conservative too, but I am firm in my convictions. I want to blaze a trail for other women." A member of All Souls' Episcopal Church, Asheville, Mrs. Stafford died of pneumonia at age thirty-eight and was buried in Riverside Cemetery.

I have a personal book signed

I have a personal book signed by Lillian exum clement