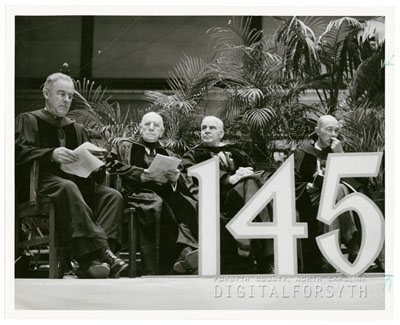 Herbert Spaugh, Moravian bishop, author, musician, and newspaper columnist, was born in Salem, the son of Rufus A. and Anna Louise Hege Spaugh. In 1918, during World War I, he served in the army at Fort Jackson, S.C. A graduate of Moravian College and the Moravian Theological Seminary, he earned an M.A. degree from Davidson College, which also awarded him an honorary doctor of divinity degree. He received an honorary LL.D. degree from Moravian College.

For a short period Spaugh engaged in furniture manufacturing, but in 1924 he became pastor of a Moravian church in Charlotte. He was consecrated a bishop in 1959. Beginning in 1933 he contributed a column, "Everyday Counselor," to newspapers in Charlotte and Winston-Salem; it was syndicated in thirty newspapers elsewhere in the South. He was the author of three books: Pathway to Contentment (1946), Everyday Counsel for Everyday Living (1951), and Pathway to a Happy Marriage (1953).

Bishop Spaugh organized the state's first Alcoholics Anonymous group, served as a trustee of Salem College and of Moravian College in Pennsylvania, was chaplain of Civitan International and the American Legion, and was an active member of the North Carolina Council of Churches, the National Conference of Christians and Jews, the North Carolina State School Board Association, and the American Guild of Organists. He also built pipe organs and served as organist and choir director for churches in Winston-Salem and Bethlehem, Pa., and organized and directed the Charlotte Boy Scout Band, which evolved into the Charlotte public school system's music program. He himself played the French horn in the Charlotte Symphony.