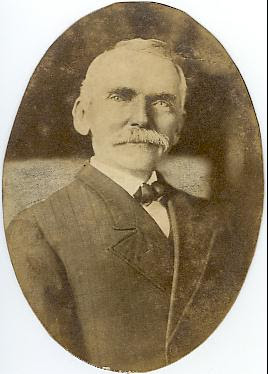 John Baptist Smith, Confederate army signal officer and inventor of a forerunner of naval blinker signaling, was born at Hycotee in Caswell County, the fifth child of Richard Ivy (an 1820 graduate of The University of North Carolina) and Mary Amis Goodwin Smith. His great-grandfather, Colonel Samuel Smith (1729–1800), served in the French and Indian War and for his service received a grant of three thousand acres in Granville County. He fought under General James Wolfe at Quebec and later named his home Abram's Plain after the 1759 battle in which Wolfe was killed.

One of the early volunteers, John Baptist Smith left Hampden-Sydney College on 15 Apr. 1861 to enlist, at age seventeen, in the "Milton Blues," which became Company C, Thirteenth Regiment, North Carolina Troops. He rose to the rank of sergeant in Company C and, on moving to Virginia, was detailed, along with his brother, William Goodwin Smith, for training and service in a signaling system devised by Captain James F. Milligan. By order of the secretary of war on 6 Mar. 1862, all soldiers serving in that capacity were transferred into a unit called the Independent Signal Corps (ISC; in contrast to the regular Signal Corps), commanded by Captain (later Major) Milligan. Although transferred against his wishes, Smith and his brother William (who joined him in October 1863) found some compensation in learning that they were part of a handpicked group, one that included in its ranks the Lanier brothers, Sidney (the poet) and Clifford, J. Hoge Tyler (a postwar governor of Virginia), and George T. Goetchins (a postwar Presbyterian leader in North Carolina). The ISC operated a series of signal and observation posts along the James and Appomattox rivers, with headquarters at Norfolk and later at Petersburg. His signal duties made Smith an eyewitness to the historic Monitor and Virginia (Merrimac) encounter.

With the expansion of the ISC early in 1863, Smith was transferred to its new Second Company as first sergeant. By then he had already established a reputation for one so young. In July 1862 he had been ordered to assist in the organization of a signal system in the Cape Fear area, where, serving under Colonel William Lamb as signal officer at Fort Fisher, he was confronted with the special problems of signaling with blockade-runners. The Confederate signal system (invented in the decade before the war and patterned after that of Albert J. Myer of the U.S. Army) depended on a flag by day and torches by night, waved to the left or right in a prearranged code. Especially for night signals, the torches made an awkward arrangement in the wind and spray aboard ship. Smith devised a method of signaling in which the operator could sit between two lanterns, one red, one white, exposing them by sliding doors to represent the left-right waves of flag or torch on land. Furthermore, the Smith method had the decided advantage of being directional: it could be flashed towards land without fear of being seen by the Union blockaders. A special board convened to examine his proposal was enthusiastic. It was adopted and placed in use on all blockade-runners.

Smith's system of signaling, which he referred to as "flash lights," was the prototype for blinker signals, which became standard in navies the world over. A variation called Ardois, using four double lanterns arranged vertically, each of which could be made to show white or red, operated by a typewriter-type keyboard, was in use by the U.S. Navy and Coast Guard over fifty years later, eventually giving way to more rapid types of Morse code blinkers.

As a reward for his invention, Smith was offered a chance to serve on a blockade-runner. He chose the Advance out of Wilmington, of which he was signal officer from May 1863 to February 1864, when he returned to the ISC as second lieutenant of the Second Company to command a station at Hardy's Bluff on the James. In June 1864 he was placed in charge of the lines from General Robert E. Lee's headquarters in Petersburg, and his men represented the last organized body to evacuate that city the following April. He commanded the Second Company at Appomattox.

Four years to the day after volunteering for service, Smith returned to Hycotee. He farmed there and on some land of his own on the North Hyco Creek. On 23 Apr. 1872 he married Sabra Annie Long (1844–1938) of Randolph County in a ceremony at the Presbyterian Church in Concord. They lived at Crescent Farm on the North Hyco, where he raised tobacco, ran Hyco Mill, and kept a small general store and post office, later named Osmond after a son. Smith was baptized in Red House Presbyterian Church and became an elder, as were his father, his brother William, a son, and a grandson. Smith and his wife had nine children: Richard Ivy, William Osmond, Helen Long Wooding, Maggie Barringer, Francis Patillo, Lilly Webb, Robert Kennon, Edwin Comer, and Mary Amis Goodwin Griffith.

Around 1888–90 the Smiths moved to Rosedale Farm near Guilford so that their children could receive a better education. There Smith was active in the Guilford County Camp, United Confederate Veterans, and began to record his wartime experiences, originally for his children and friends; they were later published in The Guilford Collegian and other papers. He shared some of his adventures with James Sprunt, chronicler of the Cape Fear. In 1891, as a member of the Red House Alliance of Caswell County, Smith served as alliance lecturer of the Fifth Congressional District.

Around 1912 the couple moved to Sutherlin, Va., and built a house beside that of their daughter, Helen Wooding, where they celebrated their golden anniversary in 1922. Smith, who served as an elder in Mercy Seat Presbyterian Church, died in Sutherlin at age seventy-nine. He was described as "a lifelong Democrat, but not an overly zealous one." Twelve years before his death he received a letter from his wartime commander, Colonel William Lamb, of Fort Fisher, recalling his service and his invention, known only to a few. He was buried at Red House Church in Caswell County.

Proceedings of the Fifth Annual Session of the North Carolina Farmers State Alliance (1891).