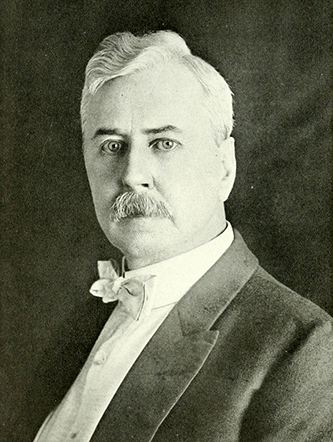 George Henry Smathers, Asheville attorney and expert on land titles in western North Carolina, was born in Turnpike, Buncombe County, one of thirteen children of John Charles and Lucilla E. Smathers. He was educated by a private schoolteacher, Mary Ann Hutsell, and at the Montford Academy on the present William Randolph School site in Asheville, Sand Hill Academy near what is now Enka, and Pleasant Hill School House near Turnpike. Smathers worked for his father's various businesses in Turnpike, Clyde, and Waynesville before attending the law school of Dick and Dillard in Greensboro in 1880; he was admitted to the bar in 1881.

Smathers practiced law for sixty years—first in Waynesville, then in Asheville as land title counsel for the Champion Paper and Fibre Company—until past the age of ninety. Active in civic and political affairs, he was mayor of Waynesville in 1886. In 1896 he was elected state senator from the district then comprised of Haywood, Buncombe, and Madison counties and became chairman of the judiciary committee. In 1899 he participated in a convention held at the Battery Park Hotel in Asheville that grew into the movement to establish the Great Smoky Mountains National Park.

While in the state senate, Smathers and Representative J. W. Ferguson of Haywood secured a tax to help maintain the public roads of Haywood, previously maintained entirely by public labor. This was the General Assembly's first act levying a tax for roads west of the Blue Ridge.

In 1899, at the request of the Eastern Band of Cherokee Indians, Smathers was appointed special assistant U.S. attorney to clear up titles to Cherokee lands and to evict trespassers. Fourteen years of intensive investigation followed, resulting in the landmark cases Eastern Band of Cherokee Indians v. William H. Thomas et al. and United States v. William H. Thomas et al. Title was perfected in the Indians to the Qualla Indian Boundary, comprising some 77,000 acres in Jackson and Swain counties, and to 68 tracts in Jackson, Swain, Cherokee, and Graham counties. As a result of this work Smathers became an expert in land titles and land litigation and after 1903 confined his practice to that specialty. He did title work for the R. Y. McAden estate, the Haywood Lumber and Mining Company, and the William H. Ritter Lumber Company in addition to the Champion Paper and Fibre Company. In 1938, at age eighty-four, he published The History of Land Titles in Western North Carolina, the definitive work on the subject; it also contains valuable information on the family and generational history of the region. During 1938 he also served as president of the Buncombe County Bar Association.

Smathers married Daisy Rice Glaze of Montgomery, Ala., on 6 Jan. 1892. They had one daughter, Ellen Rice Wiley. He was buried at Waynesville.