James Stevens Simmons, physician, army officer, and university professor, was born in Newton, the son of James Curtley and Angie Mary Stevens Simmons. The family moved to Graham when he was four, and he considered that his home until 1916. Graduated from Davidson College in 1911, he studied medicine at The University of North Carolina for two years and then entered the School of Medicine at the University of Pennsylvania, from which he received the M.D. degree in 1915. For the next year he was chief resident at the University Hospital, and as World War I approached, he was commissioned first lieutenant in the Army Medical Corps Reserve. He studied military preventive medicine at the Army Medical School and received a regular army commission and an assignment on the Mexican border as director of laboratories. His next assignment took him to New Haven, Conn., where he organized and commanded Overseas Laboratory No. 6 at the Yale Army Laboratory School. 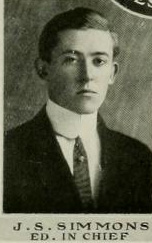 After the war Simmons directed various army laboratories both at home and abroad and made especially significant contributions to the knowledge of dengue fever and malaria in the Philippines and the Canal Zone. His findings were published in journals, and his book, Laboratory Methods of the U.S. Army, went through six editions between 1935 and 1956. In his article, "Can We Stop an Invasion by Disease?," published in the Saturday Evening Post for 1 Dec. 1945, he anticipated the use of DDT in "beating typhus and malaria in vermin infested areas throughout the world."

During World War II Simmons organized and directed a preventive medicine service to protect the health of military personnel around the world as well as civilians working in defense industries. It was said that this was "the greatest campaign of preventive medicine in history."

Having filled countless posts and served on innumerable commissions, made important contributions in such areas as preventive medicine, epidemiology, bacteriology, tropical medicine, and other fields, Simmons earned promotions through the ranks and was commissioned brigadier general in 1943. He received a large number of awards and medals and held high office in many professional organizations. Among his honorary degrees were those awarded by The University of North Carolina, Davidson College, Duke University, the University of Pennsylvania, and Harvard.

On retiring in 1946 at the end of World War II, Simmons was named dean of the Harvard School of Public Health. Under his direction it was reorganized and given an equal status with other schools in the university. From time to time he also lectured at Yale and George Washington universities and at the University of Michigan.

Simmons married Blanche Scott, who had grown up with him as a neighbor across the street in Graham. They were the parents of a daughter, Frances (Mrs. David M. McConnell). General Simmons died of a heart attack in Hartford, Conn., while he and Mrs. Simmons were returning home from a visit to their daughter in Chapel Hill. He was buried in Arlington National Cemetery.