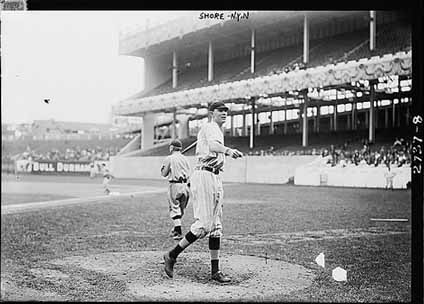 Ernest Grady Shore, baseball player and law enforcement officer, was born in East Bend, one of four children of Henry and Eugenia Poindexter Shore. Longtime Yadkin County farmers, the Shores traced their ancestry to Friedrich Schorr, who migrated to America from Switzerland in 1750. Young Shore was educated locally and was graduated from East Bend High School.

From 1909 to 1914 he attended Guilford College, where he was a standout pitcher on the college baseball team. Shore also played professionally during the summer, a fairly common occurrence during that period. He pitched briefly for the National League's New York Giants in 1912 and for minor league teams in Utica, New York, and Greensboro in 1913.

After graduating from Guilford, Shore joined the Baltimore Orioles of the minor International League. Later that summer his contract was sold by the financially troubled Baltimore team to the Boston Red Sox of the American League. At the same time the Red Sox also acquired journeyman catcher Ben Egan and a raw but talented young pitcher named George Herman (Babe) Ruth. At the time Shore was one of only a handful of college-educated major leaguers. Although Ruth was temporarily sent back to the minors, Shore, a tall, hard-throwing right-hander, became an immediate star. His first season he won 10 games, lost 4, and compiled the American League's fourth best earned run average.

The next year he won 18 and lost 8 as the Red Sox won the American League pennant. His winning percentage and earned run average were third best in the league. Shore pitched well in the World Series against Philadelphia that year, losing the opener 3 to 1 and winning the fourth game 2 to 1. The Red Sox won the series 4 games to 1. The Red Sox repeated as American League pennant winners and World Series champions in 1916. Shore won 15 and lost 10 in the regular season before starring in the Series. He won twice against the Brooklyn Dodgers, the opener and the final fifth game, and gave up only three earned runs in 17 2/3 innings.

Boston and Shore slumped slightly in 1917. Hampered by a sore arm Shore won 13 and lost 10 in 1917, as Boston fell to second place. On 23 June Shore pitched an unusual, well-known, and somewhat controversial perfect game against the Washington Senators. Boston starter Babe Ruth, not yet a famous outfielder, walked the lead-off batter and was ejected from the game for arguing with the umpire. Shore came on in relief, the base runner was thrown out attempting to steal, and Shore retired the remaining 26 batters in order. After some debate by baseball officials Shore was credited with a rare perfect game.

After the 1917 season Shore joined the U.S. Navy, where he achieved the rank of ensign. His absence from the 1918 season due to his military service and his still sore arm combined to curtail his postwar effectiveness and shorten his career. Shore was traded by the Red Sox to the New York Yankees after the 1918 season. In 1919 he won only 5 games and lost 8. He finished his major league career with the Yankees in 1920, winning 2 and losing 2 before being released. He finished up the season in the California League, pitching for Vernon and San Francisco. Unable to pitch effectively due to his arm injury, Shore retired after the 1920 season. He ended his big-league career with a record of 63 wins, against only 42 losses, and a superb earned run average of 2.45.

After retiring from baseball Shore returned to Winston-Salem, where he sold cars and later insurance. In 1936 he was elected sheriff of Forsyth County as a Democrat. He held this position until his retirement in 1970. Shore gained a reputation as an innovative administrator, who oversaw expansion of the sheriff's department from six men to seventy men.

Shore married Lucile Harrelson on 24 Nov. 1926. They had three children: Jan, Earnest, Jr., and Julia. Shore was buried at the Forsyth Memorial Park. The baseball park in Winston-Salem was named after Shore, a member of the North Carolina Sports Hall of Fame.

Gene Karst and Martin Jones, Jr., Who's Who in Professional Baseball (1973).