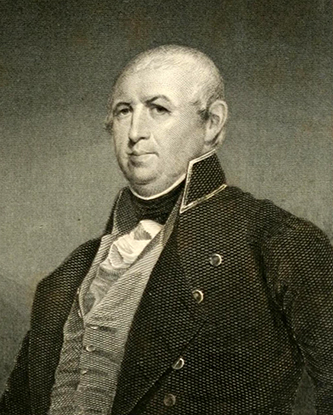 Isaac Shelby, frontiersman, soldier, and twice governor of Kentucky, was born in Frederick (now Washington) County, Md., the third child and second son of Evan and Letitia Cox Shelby. His father was a native of Tregaron, Cardiganshire, Wales, who had immigrated to America with his father's family about 1734, when he was sixteen. It is believed that the Shelby clan originated in Yorkshire, England, and originally bore the name Seby. In America the Shelbys, who had been members of the Church of England in Wales, became Presbyterians, the denomination of which Isaac was a member. Isaac early learned the use of arms and became accustomed to the rigors of frontier life. He received a fair English education, worked on his father's plantation, occasionally surveyed land, and at age eighteen became a deputy sheriff. About 1773 the Shelbys moved to the Holston region in what is now upper East Tennessee but was then considered a part of Fincastle County, Va. There Isaac fed and cared for herds of cattle in the extensive range that then characterized that area of the country.

At age twenty-three Shelby took part in his first major military engagement, the Battle of Point Pleasant, fought at the mouth of the Kanawha River, which was the culmination of the brief Lord Dunmore's War, in which Virginia frontiersmen defeated the Northwestern Indians. He served as a lieutenant in the Fincastle company of his father, who was in overall command of the Virginia troops at the end of the battle, his superiors having all been killed in the fierce fighting.

Young Shelby was left as second in command of the garrison of Fort Blair, which was erected on the site of the battle. There he remained until Lord Dunmore discontinued the garrison in July 1775 for fear that it would prove useful to the American rebels. Immediately thereafter Shelby went to Kentucky, where he surveyed lands for the Transylvania Company. The following year he returned to Kentucky to survey and improve lands for himself and to perfect military surveys earlier selected and entered by his father. During his absence from home in 1776, the Virginia committee of public safety appointed him captain of a company of minutemen. From 1777 until well into 1779 Shelby was largely occupied in securing—sometimes at his own expense—supplies for the Continental army and for various expeditions by Virginia troops.

In spring 1779 Shelby was elected to represent Washington County in the Virginia Assembly. The following autumn he was commissioned a major in the escort guard to the commissioners for extending westward the boundary between Virginia and North Carolina. As a result of this extension his home was found to be in North Carolina rather than Virginia. Shortly afterwards he was appointed a colonel in the militia of Sullivan County, which had been created in order to provide local government for the inhabitants of the new territory acquired by North Carolina in the recent boundary survey.

In the summer of 1780 Shelby was in Kentucky locating and securing the lands he had marked out and improved for himself four years earlier, when he received news of the fall of Charleston (12 May 1780) to the British. Hurrying home he arrived in Sullivan County in July and found a message from General Charles McDowell requesting his aid in resisting the British, who had already overrun Georgia and South Carolina and were then at the borders of North Carolina. Shelby assembled the militiamen of his county, asked them to volunteer their services for a short period, and marched with three hundred men to McDowell's camp near the Cherokee Ford in South Carolina. During the next three weeks Shelby and his men contributed importantly to three American victories over British and Tory forces.

News of the American defeat at Camden (16 Aug. 1780) halted operations by McDowell and Shelby, but Shelby proposed to fellow westerners that they cooperate in attacking the force of Provincials and Tories under British Major Patrick Ferguson operating in the South Carolina uplands. The result was the Battle of Kings Mountain (7 Oct. 1780), a decisive American victory in which Ferguson met his death. Shelby has been given credit for the scheme of attack that led to another important American victory at Cowpens (17 Jan. 1781).

In October 1781, in response to a request for aid from General Nathanael Greene, Shelby raised a force of four hundred riflemen and accompanied by two hundred more under Colonel John Sevier went off to join Greene in the South Carolina low country, where Greene planned to use them in blocking a possible return to Charleston of Lord Cornwallis's army. However, when this danger was removed by Cornwallis's surrender (18 Oct. 1781) at Yorktown, Shelby's force was sent to join the command of General Francis Marion on the Pee Dee. In joint operation with Colonel Hezekiah Maham of South Carolina, Shelby captured a strong British post at Fair Lawn, near Monck's Corner, S.C., on 27 Nov. 1781. Having been elected to the North Carolina legislature in the meanwhile, Shelby obtained a leave of absence and attended the legislative sessions in December 1781. Reelected to the legislature in 1782, he attended its sessions at Hillsborough in April.

In early 1783 Shelby served as one of three commissioners appointed to supervise the laying off of the land south of the Cumberland River in Middle Tennessee that had been allotted to the officers and men of the North Carolina line and to settle the preemption claims on the Cumberland. Once he had completed this service, Shelby returned to Kentucky the following April and established himself on his new plantation near Boonesboro, where for the next six years he devoted himself to his favorite occupation, the cultivation of the soil and the raising of livestock.

Shelby became a trustee of Transylvania Seminary (later Transylvania University) in 1783. He was chairman of the convention of military officers that met at Danville on 7–8 Nov. 1783 to consider an expedition against the Indians and to discuss a possible separation from Virginia. He founded the Kentucky Society for the Promotion of Useful Knowledge, organized at Danville on 1 Dec. 1787. In January 1791 he was appointed a member of the Board of War for the District of Kentucky, which was created by Congress and authorized to provide for the defense of frontier settlements and to conduct punitive raids against the Indians. For several years he was sheriff of Lincoln County. He served in the early conventions that met at Danville for the purpose of securing independent statehood for Kentucky and in the convention of 2–19 Apr. 1792 that drafted the first Kentucky constitution.

In May 1792 Shelby was chosen governor for four years by the electors to whom the constitution of 1792 entrusted the selection of the chief magistrate. He was inaugurated at Lexington on 4 June but soon moved to Frankfort, the newly chosen state capital. As first governor of the Commonwealth he confronted numerous problems in establishing the infant government on a sound basis. He nevertheless gave strong support to the operations of General Anthony Wayne against the Northwestern Indians, who constituted the principal threat to the fledgling state. During Shelby's administration Kentuckians were also greatly perturbed by the possibility that Spain would close the lower Mississippi to American commerce. This concern was fertile soil for speculative ventures and conspiracies designed to take Kentucky out of the Union. Shelby's firm and moderate policy, which nevertheless came under criticism then and later, frustrated all conspiracies and held Kentucky firmly in the Union. He declined reelection in 1796 and retired to his home in Lincoln County.

The outbreak of the War of 1812 brought a renewal of the threat from the Northwestern Indians, who had kept Kentucky in a constant state of apprehension during Shelby's governorship (1792–96). With an overwhelming demand for Shelby's return to office, he was elected by popular vote in August 1812. As governor Shelby cooperated wholeheartedly with the national government in the prosecution of the war. In 1813 he personally raised, organized, and led four thousand Kentucky volunteers to join the army under the command of General William Henry Harrison in the Northwest in an invasion of Canada. This invasion culminated in the decisive defeat of the British and their Indian allies in the Battle of the Thames (5 Oct. 1813).

In 1816 Shelby again retired from the governorship. The following year President James Monroe asked him to be the secretary of war, but he declined on the basis of age. In 1818 Shelby performed his last public service when he went with Andrew Jackson to arrange a treaty with the Chickasaw Indians by which they ceded to the United States their lands west of the Tennessee River. Shelby served as president of the first Kentucky Agricultural Society, organized at Lexington in 1818. He was chairman of the first board of trustees of Centre College, founded at Danville in 1819.

On 19 Apr. 1783 he married, at Boonesboro, Susannah Hart, the second daughter of Captain Nathaniel Hart, one of the earliest settlers of Kentucky. By her he had eleven children. Shelby's daughter Sarah married Ephraim McDowell, the surgeon who at Danville on Christmas Day 1809 performed the first successful ovariotomy.

Shelby was a large man, six feet tall, sturdy, and well proportioned, with strongly marked features and a florid complexion. He could endure long hours of work, physical hardship, and great fatigue. Dignified and impressive in bearing, he was nevertheless affable and winning. A good soldier and able politician, he possessed great executive ability. In 1820 he suffered a paralytic stroke that deprived him of the use of his right arm and lamed him in his right leg. However, his mind remained clear until his death of apoplexy six and a half years later. He was buried on his estate, Traveler's Rest, in Lincoln County. The Commonwealth of Kentucky erected a monument over his grave in 1827. In 1952, 126 years after his death, Kentucky accepted the Shelby family cemetery at Traveler's Rest as a state shrine. Counties and towns in nine states are named in Shelby's honor.

Durand, A.B., engraver. "Isaac Shelby." The narrative of Colonel David Fanning, (a Tory in the Revolutionary War with Great Britain;) giving an account of his adventures in North Carolina, from 1775 to 1783, as written by himself. Richmond, Va., Printed for private distribution only, in the first year of the independnence [sic] of the Confederate States of America. 1861. 80. https://archive.org/stream/narrativeofcolon02fann#page/80/mode/2up