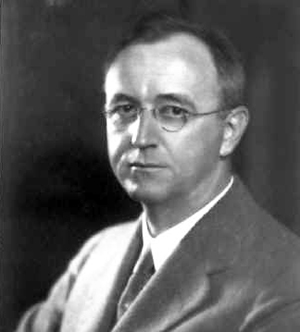 Fred Loring Seely, pharmaceutical manufacturer, newspaperman, architect, and developer, was born in Fort Monmouth, N.J., the son of Colonel Uriah, a Union officer disabled by wounds at the Battle of Shiloh, and Nancy Hopping Seely. Having to support and help educate his brothers and sister, young Seely received only a public school education. At age eighteen he was hired by Parke-Davis and Company of Detroit as one of eight employees making up the first formal pharmaceutical firm in the country. He developed a machine to make pills or tablets and another to count and package them. While in Detroit Seely shared a loft over a boardinghouse stable with Henry Ford.

In 1897 Seely joined E. W. Grove in St. Louis as secretary-treasurer of Grove's pharmaceutical manufacturing company. One of this firm's leading products was Dr. Grove's Tasteless Chill Tonic, made from the bark of the cinchona tree from Peru to treat malaria. Due to poor health, Seely resigned and traveled. When political unrest in Peru threatened the source of quinine, an ingredient of the chill tonic, Seely moved thousands of young cinchona trees to Java, making that country the world's largest producer of quinine.

Returning to the United States, Seely in 1905 bought two Atlanta newspapers, The Georgian and the Atlanta News. John Temple Graves was his editor, and Grantland Rice and Bill Nye were staff members. Seely was one of the few newspapermen who supported Admiral Robert E. Peary's claim to have been the first to reach the North Pole in 1909. He also waged a campaign to establish Prohibition and to eliminate the convict lease system in Georgia. Under this system, private individuals could lease convicts for fifty cents a day without being subject to supervision from state penal authorities. Opposition arose from businessmen who benefited from this system; they ceased to advertise in his papers, and his life was threatened. Seely sold the papers to William Randolph Hearst, but his campaigns to end the practice and to establish Prohibition succeeded.

With only an eighth-grade education, Seely followed a lifelong ambition and entered the School of Architecture at Princeton University. In Princeton he lived next door to Professor Woodrow Wilson and they became lifelong friends. Seely, in fact, became a campaign manager for Wilson in his bid for president of the United States. Seely remained at Princeton only long enough to gain the information he felt necessary for an undertaking he had in mind. In the early stages of World War I President Wilson prevailed upon him to take charge of the Ford-financed peace mission to Norway aboard the SS Oskar II. Lay and clerical persons of stature met with the leaders of Great Britain and Germany in Norway in an unsuccessful effort to end the war.

Some time earlier, E. W. Grove had been sent to Asheville suffering from a pulmonary complication. Asheville, a center for the treatment of tuberculosis, had a number of sanatoriums. Recognizing the potential of the region for development as a tourist attraction, Grove sent for Seely. Together, they located and bought thousands of acres of land for hotel and residential development.

Moving to Asheville in 1912, Seely supervised the building of, and later operated, the Grove Park Inn, which, when it opened, was described as the finest resort in the world. It was completed in eleven months with 700 men and 400 mules working 24 hours a day in shifts. The developers also laid out a model city in the heart of Asheville, having spent weeks in Washington to secure authorization for a new Asheville Post Office to serve as a nucleus for this innovative plan. The old Battery Park Hotel was torn down, the mountaintop on which it stood was leveled, and a new Battery Park Hotel and shops were erected.

In 1916 Seely purchased the Biltmore Industries from Mrs. George W. Vanderbilt and in English cottage-type buildings expanded the operation where local artisans made and sold pottery, wove cloth, and produced other crafts. As far as possible, he employed the deaf and dumb in these industries; he was particularly interested in their welfare as he had a sister and a brother who were so afflicted.

Seely was convinced that if Asheville were to flourish, it must have a balanced economy with industry as well as tourism. To that effect, he spent months in Holland and ultimately persuaded Dr. Van Vlissingen, an old friend from his days in Java, to move his huge Enka Rayon Plant from Arnhem to Asheville. Seely was the only non-Dutch member of the Enka board of directors.

Like Grove, his friend, benefactor, and father-in-law, Seely contributed generously but anonymously to numerous causes. He provided surgery and hospital treatment for children, particularly clubfooted mountain children, and as a member of the Masonic order, he donated clothing for children in the Masonic Orphanage at Oxford, N.C.

In 1898 Seely married Evelyn Grove, the daughter of E. W. Grove, and they were the parents of Gertrude (Mrs. John Eller, Sr.), Fred L., Jr., John, and Louise. His home, Overlook on a mountain above Asheville, was a Gothic castlelike building to which he frequently made additions. It housed his large collection of manuscripts of the great composers and authors of history and his collection of early printing, including the works of Gutenberg and Caxton. He was a member of the Sons of the American Revolution and the Society of the Cincinnati. Seely was decorated by the pre-Hitler German Republic for finding and reburying the bodies of twelve crewmen of a German U-Boat who had died in the Veteran's Hospital near Asheville in 1918. A handsome monument was erected at the site. At the time of his death Seely directed operations of the Battery Park Hotel, owned by his wife. An active Episcopalian, he was buried in the churchyard of Calvary Church, Arden.

My father is John Day SEELY

My father is John Day SEELY Jr. And Fred Loring SEELY was my great grandfather and EW Grove of the Grove Park Inn, Asheville, NC was my great great grandfather . I have a sister named Deborah and two half brothers John and James Seely. There is a book on the "History of the Grove Park Inn" that gives a lot of interesting facts and family history. As for the names metioned in first post, I don't find any relation with them in our family tree.
This is a very interesting article and it includes many things I never knew about my great grandfather and I appreciate the documentation of our family history.

What, if any, familial link

What, if any, familial link is there between Fred Loring Seely of Ashville and A.B. Seelye of Abilene, Kansas. A.B. Seelye was also a wealthy patent medicine businessman in Abilene in the early part of the last century. His ancestry lists relatives with the name spelled Seely but I can find no connection to F.L. Seely. Can you? Thank you.

Fred SEELY was my great

Fred SEELY was my great grandfather Andrew as far as I know we are not related to those folks in Kansas. I do have a family tree:)

Thank you for visiting NCpedia and taking time to share this question. That's an intriguing question!

Unfortunately, NCpedia does not have any additional information about a possible family connection and I am not able to locate anything in a quick search.  Pursuing this question would involve digging into genealogical research to establish a connection.

I'm sorry we can't provide a more concrete answer to this question.

One of my best friends in

One of my best friends in junior high was Mary Archer Seely (Sitaras). John Seely was her father. I always loved her middle name and now know from whom it came. I had no idea Mary was linked to such an innovative grandfather. Am sure she wishes she had known him.

Hey Stacey!! Just Google my name for fun and found this article about my great grandfather. :)

My Grandmother, Dorothy Seely Moxley of Montclair, NJ, was the daughter of James Seely; brother of Fred L Seely, Sr.

Kelly Agan: Thank you for

Kelly Agan: Thank you for this article. I have the following additional information for you to add or consider.
1.Fred and Evelyn Seely also had a son named Grove. He lived in DC the latter part of his life. Married to a Mary Louise Seely .
2. William Randolph Hearst would visit Mr. Seely in Atlanta. Evelyn Seely would not allow him to stay overnight in her house if he had his movie actress friend (Marion Davies) with him.
3. Seely is buried alongside Evelyn Grove Seely (died 1953) and their youngest daughter , Mary Louise Seely Beard (my grandmother who passed away in Jan 1950.).
4. Edwin W. Grove built the Battery Park Hotel in 1924. Evelyn Grove Seely inherited it when her father, Mr. Grove, died in at the hotel on Jan.27th 1927.The hotel was sold by court order in 1955 with the proceeds used to pay off mortgage and residual sums paid out to Grove's heirs.

There is a lot more family history but these are helpful.

Thank you for including this additional information on the history of the Seely family. Because this particular entry is licensed to us from the University of North Carolina Press, I am unable to change the content.  However, we are grateful for user contributions since they remain associated with entries and your contribution will stay with this entry for future NCpedia readers.

My old friend, John Day Seely , is the grandson of Fred Seely and Evelyn Grove Seely. You can confirm this info and update your site by going to John Day Seely obituary. John died in Naples, FL in 2008. John was born in 1932..same year his father died. I remember him having two young.sons back in latr 70's and one named.John David