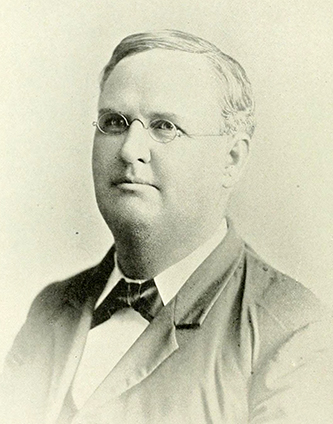 George Washington Sanderlin, baptist minister and politician, was born in Camden County, the son of Maxcy and Martha Sanderson Sanderlin. He was one of thirteen children. After attending schools in Elizabeth City, he entered Wake Forest College in 1858 and was graduated in August 1861 because of the Civil War. Sanderlin enlisted in Company E, Thirty-third North Carolina Regiment, as a private. Promoted through the ranks to captain, he served for four years, participated in forty battles, was hospitalized once, and had one brief furlough.

At the close of the war Sanderlin settled in Elizabeth City, but feeling a call to the ministry, he entered the Southern Baptist Theological Seminary in Greenville, S.C., and was graduated with honors in 1867. In the same year he also received an M.A. degree from Wake Forest College. Sanderlin was ordained at the Wake Forest Baptist Church on 1 Mar. 1868 and immediately took charge of the Goldsboro Baptist Church, which he served until January 1871. He resigned in anticipation of a tour of Egypt and Palestine with Dr. John A. Broadus. Sanderlin missed the steamer to Rome, but while in Baltimore, Md., he preached in the Franklin Square Baptist Church and was unanimously called to the pastorate of that church later in 1871. His health began to fail and he resigned in 1876.

Retiring to Goldsboro, Sanderlin turned his attention to agriculture and wrote for various publications in that field. He became widely known, and as his health had improved, he accepted the Democratic nomination for state auditor in 1888, won the election, and assumed office in January 1889. His reputation as an able, charming speaker and active campaigner caused his name to be placed in nomination for governor of North Carolina, but Elias Carr was named. After campaigning for the Democratic ticket, Sanderlin was appointed by President Grover Cleveland as fourth auditor of the Treasury Department and he and his family moved to Washington, D.C. He resigned this position after the inauguration of President William McKinley but continued to live in Washington.

Two years of ill health followed by a serious fall led to Sanderlin's death in a sanitarium in Baltimore. His remains were sent by train to Raleigh, where they were met by a large delegation, including the governor, all state officers, and members of the Raleigh First Baptist Church and of fraternal orders to which Sanderlin had belonged, and escorted to Oakwood Cemetery for interment.

Sanderlin served as vice-president of the North Carolina Baptist Convention and as a trustee of Wake Forest College from 1869 to 1871 and from 1883 to 1892. He was a member of the Odd Fellows, Raleigh Council Royal Arcanium, No. 551, and Knights of Pythias, Oak City Lodge Knights of Honor. Both Wake Forest College and Judson College, Hendersonville, awarded him an honorary doctor of laws degree in 1891.

He married Eliza W. Wooten, the daughter of Council Wooten of Lenoir County. They had six children: Nannie Eliza Wooten, Beulah, Georgia, Pattie, Rosalie, and one other.