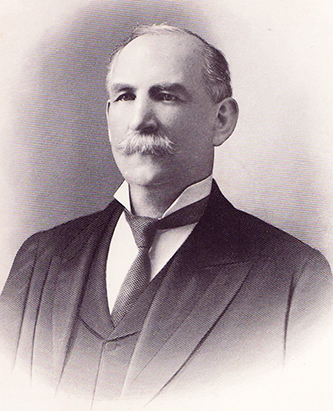 Robert Payne Richardson, Jr., tobacco manufacturer, was a native of Rockingham County and the son of Robert Payne Richardson (1820–1909) and his second wife, Mary Elizabeth Watlington. Young Richardson grew up on the family plantation at Wright's Crossroads, which is now located within Reidsville. He attended local schools in Reidsville and Wentworth and the Bingham School in Orange County in 1872. The next year he joined his father's tobacco and mercantile business as a clerk and was also involved in tobacco sales.

In 1877 he left his father's firm and founded R. P. Richardson, Jr., and Company for the purpose of manufacturing smoking tobacco. At the time, the tobacco industry in Reidsville produced chewing tobacco almost exclusively. Richardson launched a new smoking tobacco, Old North State, that soon became a leading regional brand. The success of Old North State influenced several local manufacturers to follow Richardson's lead, and by the turn of the century Reidsville was second only to Durham in the production of smoking tobacco. As early as 1890 Richardson erected a modern, commodious five-story brick structure to house his factory. Although the factory burned in 1917, it was partially rebuilt and continued to be the major family business until 1926, when it was sold to Brown and Williamson of Winston-Salem. Other family enterprises included the acquisition of 33,000 acres in Tennessee, gold mining in Montgomery County with the Rich-Cog mine and Rockingham Mining and Investment Company, and large-scale farming in Rockingham County.

Richardson was a member of the Democratic party but never sought political office. He was a charter member and elder of the First Presbyterian Church of Reidsville. On 30 Oct. 1877 he married Bettie Watt, and she had one son, Pickney Watt, before her death on 30 Aug. 1882. Richardson then married, on 20 Dec. 1892, Margaret M. Watt, and she had three children: Robert Payne III, Margaret Elizabeth, and Sarah Dillard, who died young. Richardson died in Greensboro and was buried in Greenview Cemetery, Reidsville. He was survived by his wife, who died on 14 July 1924.

Robert Payne Richardson III (12 Jan. 1897–17 Feb. 1967), his son, was graduated from Davidson College in 1918 and then served for a year in the U.S. Marine Corps. He married Lucy Irvin on 5 Nov. 1921. He assisted his father in the tobacco factory, and after it was sold he joined in 1927 the Nu-Shine Manufacturing Company, a local producer of shoe polish. He was president of Nu-Shine from 1927 to 1938, when the company was merged with American Products. In addition to his involvement in the other family businesses of land trading, timber operations, farming, and mining, Richardson directed the Belmont suburban development of Reidsville. He served on the State Board of Mental Health from 1948 to 1967.