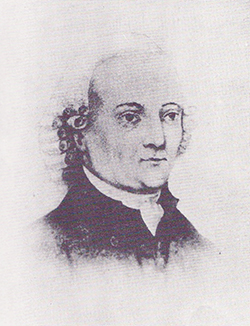 Carl Gotthold Reichel, educator and Moravian bishop, was born in Hermsdorff, Silesia, the son of Carl Rudolph and Eleonore Sophia Reichel. His father was a Lutheran clergyman and family members had been Lutheran churchmen for four generations. Young Reichel's earliest education was at Moravian schools in Gross-Hennersdorf and Niesky. After joining the Moravian church, he received his theological degree at Barby, Saxony. He taught at Niesky in 1774 and from 1778 to 1780. In the intervening years he did educational work at Barby. At Gnadenfrei, in 1780, he married Anna Dorothea Maass, and they had seven children. From 1780 to 1784 Reichel served as secretary of the governing board of the church.

Sent to America, he was the first principal or inspector of Nazareth Hall at Nazareth, Pa. In the fall of 1785 he started teaching with eleven boys. Reichel's experience and leadership made the school such a success that students came from southern states and the West Indies. John Konkaput, a Housatonic Indian from Stockbridge, Mass., was one famous student. At this time, Reichel wrote Geographie zum Gebranch der Schulen in den evangelischen Brudergemeinen (2 vols., Barby, 1785). In addition, he edited Lesebuch für Deutsche Schulkinder (1795) by G. G. Otterbein for American use.

After seventeen years as inspector at Nazareth Hall, Reichel accepted the call to be head of the southern province of the Moravian church. In Bethlehem, Pa., Bishop John Ettwein consecrated him as bishop in 1801. Arriving in Salem to the music of trombones in 1802, Reichel assumed the duties of his office, which included being a member of Helfer Conferenz fürs Ganze. He held the usual services—among them love feasts and Easter services. But he also attempted to preach to the slaves and Indians. Simon Peter was ordained by him as the first presbyter of Wachovia. In 1803 Reichel conducted the services when the cornerstone was laid for the Salem Female Academy. At this time he was teaching singing classes for children in English and German. In 1806 his first wife died and was buried in Salem's God's Acre.

Governor Nathaniel Alexander toured Salem in 1809 as a guest of Reichel. In the same year the clergyman consecrated the new church built in Salem. During a trip to Pennsylvania he married Catharina Fetter of Lancaster at Lititz, Pa. The following year Joseph Caldwell, president of The University of North Carolina, visited Salem and Reichel. After receiving an honorary D.D. degree in 1811, Reichel presented the university with the Periodical Accounts, a three-volume series on Moravian missions to the Indians in the world. After accepting a call to go to Bethlehem, Pa., he visited all of the Moravian congregations in the Salem area.

Arriving in Bethlehem in 1811, he held the same position as in Salem. In 1818 he was selected to go to the General Synod at Herrnhut, Saxony. Traveling by way of New York and England, he went with his wife and two younger sons. Due to poor health, Reichel visited Niesky. In 1820 his second wife died, and five years later he died in Niesky. His heirs include William C. Reichel and Levin T. Reichel, who also were prominent in the Moravian church.