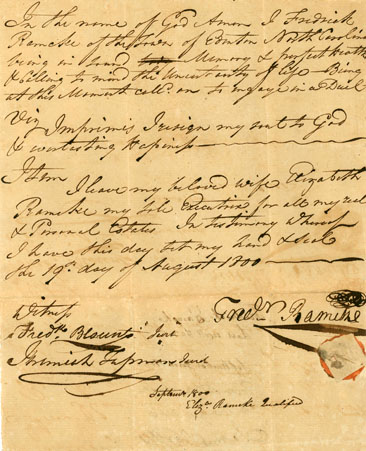 Frederick Ramcke, physician, first appeared in North Carolina in 1783. His antecedents are unknown. His involvement in a large debt to a New York physician at the end of his life suggests a prior association with that city. His unusual surname has been subject to many interpretations. When J. R. B. Hathaway was publishing his genealogical quarterly in 1901, he conferred with another noted historian, Marshall DeLancey Haywood, on this subject, and they decided Ramcke was the correct spelling. The doctor settled initially in New Bern. On 10 Dec. 1783, as "practicioner of physik and surgery, usually residing in New Bern but at present in Edenton," he gave a power of attorney to William Righton to collect debts due the estate of Joseph Smith, the former husband of his wife. Ramcke had recently married Elizabeth Hardy, the daughter of Robert and Agnes Little Hardy of Edenton and the widow of Joseph Smith, a merchant in Edenton.

The public records in New Bern reveal nothing to throw light on Ramcke's residence there and undoubtedly his stay was brief. On 4 Aug. 1784 he advertised in the North Carolina Gazette in New Bern that he planned to leave town shortly and requested all those indebted to him to make immediate payment. Not long afterwards he moved to Edenton. He seems to have prospered in his new location, for, the Chowan deeds show, over the next fifteen years he purchased real estate, slaves, and expensive furniture. In 1790 Frederick Ramcke was living beside Captain Josiah Collins and maintained a shop next to his residence.

Less is known about Ramcke's professional life. It appears that a Dr. James Ward was his assistant from 1789 to 1798. In the latter year Ramcke and an Edenton colleague, Dr. John Beasley, found themselves in trouble with the community. Smallpox at the time was still a dreaded and often fatal disease. Although vaccination had been introduced in England from Turkey early in the eighteenth century, its use was not widespread at the century's end. It was dangerous and controversial. The two doctors had attempted to introduce it to the people of Edenton. Late in 1798 Blake Baker, then the attorney general of the state, prepared an indictment against the two men to be laid before the grand jury of the Edenton District. In the indictment Ramcke and Beasley were charged with maintaining a pesthouse for smallpox sufferers and "by force of arms innoculating divers persons." This episode was the subject of a sketch by Joseph B. Cheshire in his book Nonnulla, in which he referred to the physicians as medical martyrs. Cheshire could find no record that a grand jury had ever endorsed the bill. However, he commented that the fact that one was even drawn up was evidence that the progressive physicians had encountered opposition and prejudice in their efforts to control smallpox.

Ramcke soon had difficulties of a different kind. Economic troubles had surfaced. On 15 Apr. 1799 he sold some property at a loss to Dr. John Goodwin, of New York City, who had sued him for debt. An argument developed sometime in 1800 between Ramcke and Samuel Butler, a prosperous Edenton merchant. No clue has been found as to the cause. According to the custom of the time, though illegal, dueling was accepted as a manner of settling an altercation. On 15 August the two men were arrested as "being about to engage in a duel." Legal intervention did not cool tempers and the duel finally took place two weeks later. At the exchange of fire, Butler was wounded in the thigh. Both parties left the field apparently satisfied. Immediately afterwards, however, the doctor went into his shop and, in the words of the local newspaper, "by firing two pistols through his head, put a period to his life." If his fulsome obituary can be trusted, a gracious demeanor belied his troubled spirit. The Edenton paper lamented the "loss to the public in being bereaved of the services of a man of unblemished morals, untainted integrity, and singular probity and goodness."

On 19 Aug. 1800, after the initial encounter with Butler, Ramcke had made a will. It was written in a large, florid hand, reflecting no doubt his disturbed emotional state, and began with the phrase "calling to mind the uncertainity of life and being at this moment called upon to engage in a duel." He devised all his property to his wife, Elizabeth. She did not long survive him and died on 4 Dec. 1801. They were the parents of two children, Josiah Frederick and Anna Catherine. As there is no further record of them, they are presumed to have died young. By her first husband Elizabeth Ramcke had a son, Robert Hardy Smith, who lived until 1840.

Elizabeth Vann Moore to the author.