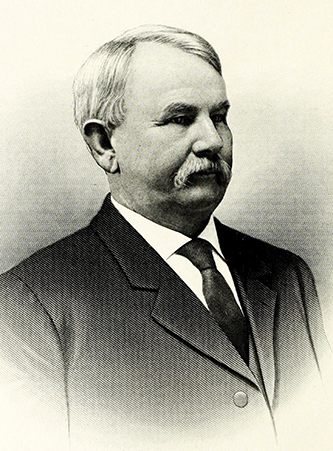 George Washington Ragan, textile manufacturer, was born in Gaston County, the son of Daniel Franklin and Harriet Frances Glenn Ragan. Self-educated, he is said to have joined in May 1864 the Junior Reserves, which became Company C of the Seventy-first Regiment of Confederate Troops, and to have seen service in eastern North Carolina and Virginia. Returning to the family farm, he remained until his father's death in 1872, when he began operating a series of nearby community stores before moving to Gastonia as a merchant in 1880.

In 1885 Ragan entered into a mercantile partnership with George A. Gray in the community of Lowell but after a year he returned to Gastonia. In 1887 he joined a group of other men, including Gray, to organize the town's first cotton mill and in 1890 he joined a small group to establish a bank, of which he was president and director for two years. Resigning from the bank in 1893, he joined others in creating a second mill, the Trenton Cotton Mills; he became its treasurer and, in effect, the chief executive officer. The mill was a success, but Ragan sold his interest in 1899 to undertake the organization of an even larger mill. In 1900 the Arlington Cotton Mills were established to produce combed cotton yarn of the finest quality and capable of competing with yarn heretofore produced only in the North. Ragan also was involved with mills in Charlotte and engaged in the development of real estate in both Gastonia and Charlotte.

A Presbyterian, Ragan was a donor to Davidson College, to a college in Georgia, and to the Presbyterian Orphans Home at Barium Springs, N.C. He married, first, Amanda Zoe Reid in 1883, and they became the parents of three daughters, only one of whom survived infancy. Following the death of his wife in 1891, he married Bettie Gibson Caldwell, and they became the parents of two sons and four daughters.