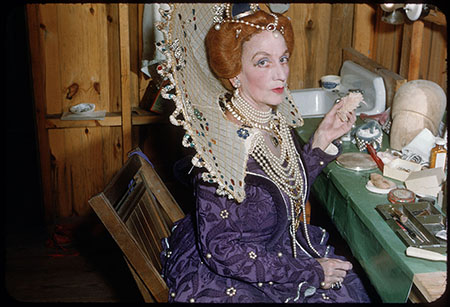 Lillian Hughes Prince, actress, was born in Birmingham, Ala., the daughter of George Washington and Mary Lillian McTyeire Hughes, and attended the local schools. On 24 Nov. 1915 she married William Meade Prince, a New York illustrator. She began her acting career while the Princes were living at Swan Pond, their estate at Westport, Conn., in a pre-Revolutionary farmhouse that they had restored. In one of her first roles with the Westport Players she played a bridesmaid in a play starring Dorothy Gish. She studied acting with Harry Irvine at the Academy of Allied Arts in New York City and played a nine-week season at Irvine's Theater-in-the-Woods at Boothbay, Maine.

When the Princes moved to Chapel Hill in the 1930s, Lillian Prince became active in the Carolina Playmakers, appearing in thirty or more of their productions, including Paul Green's The House of Connelly, The Little Foxes, Ah, Wilderness, Our Town, and The Madwoman of Chaillot and such musicals as Showboat, Oklahoma, and Spring for Sure. She also worked with the organization for British War Relief.

After appearing in Chapel Hill in Howard Richardson's Dark of the Moon, Mrs. Prince joined the cast of the Shubert national touring company of the play in the demanding role of the "cunjer woman," which she played throughout the Northeast and the Midwest. In Chapel Hill she also sang roles in such Gilbert and Sullivan operettas as The Pirates of Penzance and Pinafore, and she performed with the Raleigh Little Theater in Blithe Spirit.

During the 1940s and 1950s Mrs. Prince played the role of Queen Elizabeth in Paul Green's outdoor drama, The Lost Colony, presented each year on Roanoke Island. The Princes had a house on the island and spent their summers near the theater with their beloved poodle, Zaza.

Mrs. Prince died in New York, survived by a sister, Mrs. Walter Barrett of New York City. She was buried in the Chapel Hill Cemetery. In her will she bequeathed considerable funds to the Carolina Playmakers, which had contributed extensively to her acting career.