Charlie Clay Poole, pioneer country music recording artist, banjoist, singer, and entertainer, was born in Randolph County, the son of Philip, whose father was an Irish immigrant, and Betty Johnson Poole. Both parents were mill workers in Haw River, Alamance County, where they had moved from Iredell County. Young Poole apparently developed a strong interest in music while still a small child. Due to his poor rural background he could not afford formal musical training, so he made himself a banjo out of a gourd and taught himself to play. It was only after he had gone to work in a local textile mill that he bought himself a real banjo for $1.50.

The exact source of Poole's unique three-finger picking style is not known although it is possible that he learned to pick in a rolling style by listening to the early recordings of such classical artists as Fred Van Epes, violinist, and Vess Ossman, banjoist, who were popular in the pre–World War I era. A childhood accident while playing baseball left him with partially deformed fingers on his right hand, which probably contributed to the development of the three-finger style. Whatever the cause, his method of playing was certainly ahead of its time. After working long hours at night at the Leaksville Cotton Mill in his early twenties, Poole saved just over $200, bought a Gibson banjo, and quit, never to work in a mill again. He joined with Norman Woodlief, guitarist, Lonnie Austin, who played anything but mostly fiddle, Haman Newman, left-hand tenor banjo, Mae Weeks Mabes, pianist, and Posey Rorrer, fiddler, to form a band. 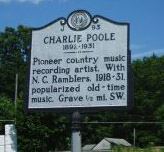 About 1917 or 1918 Charlie Poole combined his talents with those of Posey Rorrer (1891–1936), a fiddler from Franklin County, Va., to form the North Carolina Ramblers as a string band. Poole later married Rorrer's sister and both he and Rorrer moved to Spray, N.C., in 1920.

Between 1920 and 1925 Poole and Rorrer began to achieve a substantial reputation over a wide area. The combination of Poole's three-finger banjo playing and Rorrer's old-time fiddling began to make them popular at square dances, corn shuckings, and parties. Two guitarists, Clarence Foust, a childhood friend of Poole, and Norman Woodlief, a resident of Spray, began to accompany Poole and Rorrer on their musical excursions. The addition of these two men as well as others gave the band a more complete sound. By 1924 the North Carolina Ramblers were giving concerts over a wide area of the Southeast, including Virginia, West Virginia, Ohio, Kentucky, and Tennessee.

In June 1925 the Ramblers went to New York City to make their first records. Recorded country music was still in its infancy, with only a handful of records having been released by various mountain musicians. On 27 July 1925 the North Carolina Ramblers cut four sides for the Columbia Record Company. Their first release was Columbia 15038-D, "Don't Let Your Deal Go Down Blues / Can I Sleep In Your Barn Tonight Mister." The success of this record, which sold 102,451 copies, was a clear indication of their popularity since the average sales for a Columbia country music record of that time was about 5,000.

Each year between 1926 and 1931 the Ramblers returned to Columbia studios to make records, cutting a total of more than seventy sides; in addition, Poole made records for the Paramount and Brunswick record companies in 1929. By 1931 the North Carolina Ramblers had sold almost one million records. The songs recorded by Charlie Poole during this five-year period have now become standards among Blue Grass and Country Music musicians. They include "White House Blues," "Budded Roses," "If I Lose," "There'll Come a Time," and others. Poole's three-finger banjo style was also highly influential in the development of the three-finger style used in Blue Grass Music long after his time.

The personnel of the North Carolina Ramblers changed on several occasions and came to include Lonnie Austin and Odell Smith, fiddlers from Leaksville, and Roy Harvey, guitarist of Beckley, W.Va. The band played theater circuits, schoolhouses, and fiddler's conventions and from 1928 to 1930 presented live radio shows in Virginia and Pennsylvania.

In the early months of 1931 a movie company in Hollywood hired Poole and the North Carolina Ramblers to play the music for a western movie. However, on 21 May, a few weeks before he was to leave for California, Poole suffered a fatal heart attack in Spray at the home of his sister, Sarah Elizabeth Seaver. He was thirty-nine.

Clifford K. Rorrer, Charlie Poole and the North Carolina Ramblers (1968) and Rambling Blues: The Life and Songs of Charlie Poole (1982).