Edwin Anderson Penick, bishop of the Protestant Episcopal church of the Diocese of North Carolina, was born in Frankfort, Ky., the son of Edwin Anderson and Mary Atchinson Shipman Penick. His father was an Episcopal priest. After careful training at home and in local schools he attended the University of the South, where he was awarded the A.B. in 1908; he received the A.M. from Harvard University in 1909 and was graduated from the Theological Seminary of Virginia in 1912. In 1922 Penick was awarded the honorary D.D. degree from both the University of the South and the Virginia Seminary. The University of North Carolina honored him an LL.D. in 1948. Penick married Caroline Inglesby Dial on 20 June 1917, and they had three children: Edwin Anderson, who became a college professor: Dr. George Dial, a pathologist; and the Reverend Charles Inglesby. 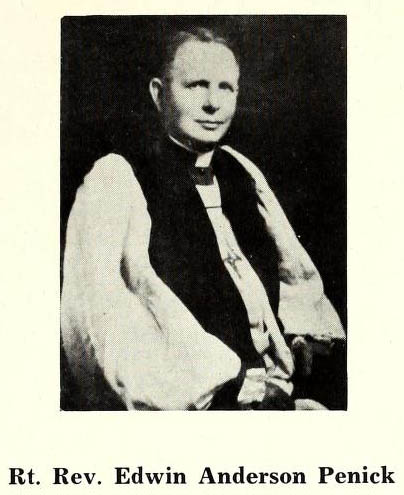 After his graduation from the seminary, Penick was ordained to the diaconate in 1912 and to the priesthood in 1913. He was rector of St. Paul's Church, Bennettsville, S.C. (1912–14) and the Church of the Good Shepherd, Columbia, S.C. (1914–17). During World War I he was civilian chaplain of the Episcopal Church War Commission, Camp Jackson, S.C. (February–September 1918), then served as first lieutenant in the Chaplain's Corps, U.S. Army, until 1919, when he became rector of St. Peter's Church, Charlotte. He was consecrated bishop coadjutor to Bishop Joseph Blount Cheshire of the Episcopal Diocese of North Carolina on 15 Oct. 1922 and succeeded to the bishopric on 27 Dec. 1923.

Bishop Penick served for thirty-seven years as coadjutor and bishop of North Carolina. When elected coadjutor he was the youngest member of the House of Bishops, and at the time of his death he was senior in service in that body; he had served as its vice-president from 1946 to 1952.

Bishop Penick had a calm manner. As one of his close associates put it, he did not say much but what he said was worth listening to and heeding. He began each day by reading a page of the Greek New Testament. Deeply involved in secular as well as religious education, he was a trustee of the University of the South; chairman of the board of trustees of St. Mary's College, Raleigh; president of the board of trustees of St. Augustine's College, where he was active on the campus particularly at the opening and closing of each school year; and president of the board of managers of the Thompson Orphanage. He was especially influential in increasing the role and importance of the Women's Auxiliary in the life of the church and made every effort to further the service of the Good Samaritan Hospital in Charlotte and St. Agnes Hospital in Raleigh. Bishop Penick was the founder and first president of the North Carolina Council of Churches and was chairman of the North Carolina Commission of Interracial Cooperation.

In addition to supporting higher education at St. Mary's, St. Augustine's, and Vade Mecum, Penick urged the development of a students' assistance program on the campus of The University of North Carolina. In 1926 the first director, Andrew Milstead, was named; he was followed by Thomas A. Wright, who later became bishop. This program was later expanded to colleges in Raleigh, Greensboro, and Charlotte.

As a young man Penick was active in sports and won the tennis championship of his state. He was a member of the social fraternity Alpha Tau Omega and of the scholastic society Phi Beta Kappa. He was an honorary Rotarian and a Democrat. In April 1964 the Edwin A. Penick Home for the Aged in Southern Pines became a reality, a proper monument for this man who spent his life working for the welfare of others. He was buried in Oakwood Cemetery, Raleigh.