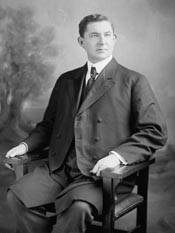 Gilbert Brown Patterson, lawyer, legislator, and teacher, was born near Maxton in Robeson County, the son of Gilbert and Margaret Patterson. He attended Shoe Heel Academy in Shoe Heel (now Maxton), Laurinburg High School, and The University of North Carolina, from which he was graduated in 1886. Patterson then taught in Elizabeth City and studied law (1886–89). He was admitted to the bar in 1890 and began practice in Maxton.

In 1898 Patterson was a Red Shirt leader in the campaign that returned North Carolina to the Democratic party after the tremendous Populist surge in the 1890s. He served in the General Assembly from 1899 to 1901. In 1902, as a candidate for nomination to Congress from the Sixth District, he sought to unseat John Dillard Bellamy of Wilmington. E. J. Hale of Fayetteville and Joe A. Brown of Chadbourn were also contenders, but at the convention in Fayetteville the contest became a fight between the Bellamy and Patterson forces. The voting continued until well past midnight, with Bellamy always leading. Some delegates left disgusted and disgruntled, but the supporters of the two leaders continued to work. Finally at 7:00 A.M. the following day, Brown threw his support to Patterson, who won the nomination by twenty-five votes. Patterson was elected in 1902 and again in 1904.

Patterson returned to his law practice in Maxton in 1907. In the same year he married Mrs. Mattie McNair Evans. One of the most respected lawyers in Robeson County, he influenced many with his opinions. He took part in two controversial causes in Robeson. The county was by far the largest in the state, and from time to time some part of Robeson wished to secede and become a separate county or to be annexed to a neighboring county. In 1911 one of the bitterest fights concluded with the creation of Hoke County. Patterson was one of the leaders of the antidivisionists.

In 1920 he was on the opposite side of the campaign. The leaders in several towns led the divisionist movement while Patterson was running for the state senate. Each town hoped to be the seat of the new county. Lumberton, the county seat, and Fairmont were the only large towns that voted against division, but the small towns and rural areas opposed it. L. R. Varser was elected to the senate, and the antidivisional candidates won seats in the General Assembly. This was Patterson's last campaign.

Gilbert Brown Patterson was a large landholder, a Master Mason and a Shriner, and for many years a ruling elder in the Presbyterian church. He was honored posthumously by his hometown of Maxton with the naming of the Gilbert Patterson Memorial Library, which opened in 1927.