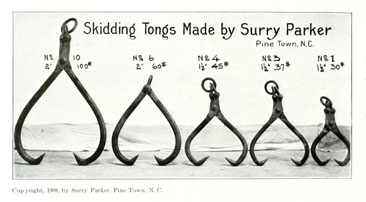 Surry Parker, designer and builder of steam logging machinery and founder of Pinetown, was born in Nansemond County, Va., the son of Confederate Captain George Thomas Parker, of Gates County, and Eunice Katharine Riddick Parker. Parker's ancestors had lived in Gates County since 1740. Surry Parker was educated at Suffolk Military Academy, but because of difficult conditions after the Civil War he left school at age seventeen to work as a locomotive fireman and later as a locomotive engineer for the Roanoke Railroad and Lumber Company. He continued on his own, however, to study mechanical engineering, his chief talent and interest.

By 1893 Parker established his own business, in which he designed and built labor-saving steam logging machinery, excavating and dredging machinery, and engines for driving piles and hoisting machinery (e.g., cranes, derricks, and winches). He built the town of Pinetown in Beaufort County around his shops, from which many mechanics trained by him branched out on their own. Among these men was Sam Jones of Hyde County, who went on to found the Berkley Machine Works and Foundry Company of Norfolk, Va.

At the turn of the century Pinetown had a population of approximately five hundred, consisting of Parker employees and their families. Parker brought in a doctor for the community and hired teachers for the elementary school that he built. He also built a general store, three churches, and an "opera house," where theatrical productions and early silent movies were shown, and established a lending library in his home for the townspeople. Prior to World War I, the equipment built in Pinetown was sold throughout the logging states of the East and in South America. Parker patented several machine parts. Always looking towards the future, he worked on plans for such things as a machine-driven airplane and an escape hatch for submarines.

The first person to own an automobile in Beaufort County, Parker was an early advocate of good roads; he was one of the first highway commissioners in Beaufort. In addition, he built the railroad between Plymouth and Washington, which later became part of the Norfolk Southern Railway system. 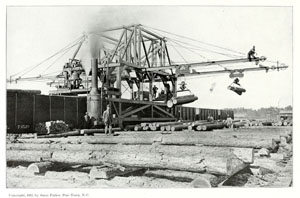 In his later life Parker became southern manager of the Stave and Timber Corporation, the lumber division of the Arbuckle Sugar and Coffee Company, of New York, which had large interests in the Dismal Swamp area of North Carolina and Virginia. During the Great Depression he returned to building logging machinery at the Surry Parker Machine Works in Norfolk County, Va., and continued this work until his death in Norfolk. He was buried in Cedar Hill Cemetery, Suffolk, Va.

Parker was a member of the American Forestry Association, the Brotherhood of Locomotive Engineers, the Masonic order, and the Methodist church. He was married three times: to Ida Jane Whaley, by whom he had one daughter, Katharine Isabel; to Mary Shepard Odom, by whom he had five children: Mary Shepard, Elizabeth Walton, Surry, Jr. (died in infancy), Margaret Byrd Riddick, and Jane Odom; and to Patty Borland Odom, his second wife's sister.