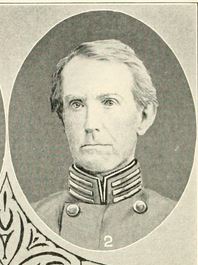 John Paris, Methodist Protestant clergyman, Confederate chaplain, and author, was born in that part of Orange County that became Alamance in 1849, the son of Henry and Mary Johnston Paris. There appears to be no record of his education, but in 1842 at the annual conference he received deacon's orders in the Methodist Protestant church in North Carolina. At some unknown time he apparently was awarded the honorary doctor of divinity degree, as in later life he was referred to as Dr. Paris.

Under the direction of the president of the conference, he was assigned to the Roanoke Circuit early in 1843, but in November he became an associate pastor in the Guilford Circuit. In 1846, at his own request, he was left without an appointment, when he probably engaged in mission work or in writing. He was a delegate to the General Conference of the church in 1846, and in 1849 he published a History of the Methodist Protestant Church: Giving a General View of the Causes and Events that Led to the Organization of that Church. In 1850 he was again a delegate to the General Conference and in 1852 he moved to Virginia. In the latter year he brought out his second book, Baptism, Its Mode, Its Design and Its Subjects, considered as an ordinance of the Church of Christ, in Baltimore. Apparently a third book, of which no copy may have survived, was published; in 1860 B. W. Wellons, editor of the Christian Sun, was the author of The Christians, South, Not Unitarians in Sentiment: A Reply to Rev. John Paris' book, Entitled "Unitarianism Exposed, As It Exists In the Christian Church, &c."

On 11 July 1862 Paris was commissioned chaplain of the Fifty-fourth Regiment of North Carolina Troops, perhaps one of the oldest chaplains in Confederate service. He was considered by the men with whom he served, however, to be one of the most efficient chaplains. Paris participated in military action to a greater extent than was expected of chaplains and he suffered the same hardships as the men. In addition, it was reported that he "walked hundreds and hundreds of miles to preach to the soldiers."

In February 1864, twenty-two Confederate deserters were hanged at a hastily constructed gallows at the brigade's encampment on the south side of the Neuse River about a mile from Kinston. Paris's diary for 5 February records that men named Jones and Haskett were sentenced by a court martial to be hanged, having been "found in the enemy's lines in arms against us." After visiting them in their confinement, the chaplain wrote: "They were the most hardened and unfeeling men I ever encountered and met their fate with apparent indifference." On the eleventh he visited five more convicted deserters whom he found "in Great distress apparently." On the following day in the prison he baptized John L. Stanley and William Irving, shortly before they were taken to the gallows, while five others "made confession of penitence at the gallows." On Sunday, 14 February, Paris visited each of the thirteen men who were to be hanged the following day. He also visited two others, newly convicted, and heard their sentences read to them. "They insisted they should not be hanged as they had been persuaded to do so [that is, join the enemy]." On the morning of the fifteenth he baptized eight of the prisoners just before they were taken to the gallows.

The group of thirteen revealed the names of the Union men who had "induced" them to desert, and Paris turned a list of them in to the commanding general's headquarters. His diary records that the condemned men were then "arranged on the scaffold and all were ushered into Eternity at a given signal." It was further noted that some women and children, presumably relatives, were present at the hanging and that they were deeply moved by the scene.

On Monday morning, 22 February, the chaplain met and prayed with the two most recently convicted men—one named Kellam, who "professed to be prepared for death," and another named Hill, who was "calm and said he was not afraid to die." Some of these men, all of whom were recently Confederate soldiers, had joined the North Carolina Union Volunteers but were captured on 1 February in a Confederate drive on enemy-held New Bern. After these several days of hangings, Paris preached a long and impassioned sermon at the regimental encampment site on the south side of the Neuse River about a mile from Kinston, taking as his text verses 3–5, chapter 27, of the gospel according to St. Matthew, concerning Judas's betrayal of Christ for money. While he dramatically explained that the deserters had been lured by Union soldiers from their sworn allegiance for a few pieces of silver, he also made a strong appeal for renewed patriotism and a drive to Confederate victory. The men who witnessed the hanging and heard the sermon probably never forgot it. The sermon apparently was delivered extemporaneously, as Paris spent the next two days writing it down "by request" and then revising it. Soon afterwards it was printed in Greensboro and widely distributed. It bore the title A Sermon: Preached Before Brig.-Gen. Hoke's Brigade, At Kinston, N.C., on the 28th of February, 1864, By Rev. John Paris, Chaplain Fifty-Fourth Regiment N.C. Troops, Upon the Death of Twenty Two Men, Who Had Been Executed in the Presence of the Brigade for the Crime of Desertion. In the North there was criticism of Union leaders for permitting Confederate deserters to serve in Federal units, thereby risking capture and such a fate as this.

After the war Paris reestablished his North Carolina affiliations and became pastor of Methodist Protestant churches in the Albemarle Circuit of the state. He was a delegate to the General Conferences of 1866, 1870, 1874, 1877, and 1879; in the latter year he was president. In 1881 the needs of the church in La Grange were such that he served it as well as his regular churches a hundred miles distant. Finally, during the last year of his life, he served only the La Grange Mission.

While a chaplain Paris kept a detailed diary and from its entries the sketch of the Fifty-fourth Regiment was largely compiled for publication in Walter Clark's five-volume history of North Carolina troops. His diary and other unpublished writings are in the Southern Historical Collection at The University of North Carolina. The diary is noteworthy for its record of casualties. Paris remained a loyal Confederate for the rest of his days. To the periodical, Our Living and Our Dead, he contributed a fourteen-part "Soldier's History of the War." The first installment was dated from Enfield, 1868, but it appeared in the issues of the magazine between December 1874 and March 1876. To the Southern Historical Monthly in January and February 1876, he also contributed a two-part article, "Causes Which Produced the War." Another book by him, The Methodist Protestant Manual: A Concise Treatise Upon the Principles of the Government of the Methodist Protestant Church, was published in Baltimore in 1878.

Paris's first wife was a Miss Bellamy of Edgecombe County who died shortly after their marriage. On 19 Dec. 1849 he married Maria Yancey of Mecklenburg County, Va., and they became the parents of eight children. On 5 Mar. 1864 he noted that he had just received the first letters from two of his children, Mary Ellen and John. Suffering a chronic illness in his last years, he nevertheless continued his work until shortly before his death when he went to Buffalo Springs, a health resort in Virginia. He died there in the family of his father-in-law and was buried at La Grange, Lenoir County, N.C.

Minutes of the Proceedings of the 58th Session of the North Carolina Annual Conference of the Methodist Protestant Church (1884).

Paris, John. History of the Methodist Protestant Church : giving a general view of the causes and events that led to the organization of that church, and a more particular account of transactions in North Carolina, never before published, with an appendix ... Baltimore : Printed by Sherwood & Co. 1849. https://archive.org/details/historyofmethodi00pari (accessed May 21, 2013).

Rev. John Paris, 1809-1883. A Sermon: Preached before Brig.-Gen. Hoke's Brigade, at Kinston, N. C., on the 28th of February, 1864, by Rev. John Paris, Chaplain Fifty-Fourth Regiment N. C. Troops, upon the Death of Twenty-Two Men, Who Had Been Executed in the Presence of the Brigade for the Crime of Desertion. Greensborough, N.C.: A. W. Ingold & Co., Book and Job Printers, 1864. UNC Press: https://docsouth.unc.edu/imls/paris/menu.html