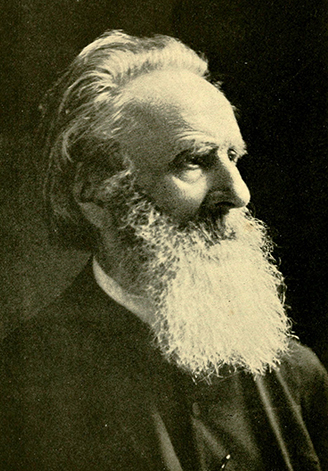 Johannes Adam Simon Oertel, artist and Episcopal clergyman, was born in Fürth, near Nuremberg, Bavaria, the son of Thomas Friedrich and Maria Magdalena Mennensdorfer Oertel. Expecting to become a missionary, he began to study under a Lutheran pastor, but he demonstrated such clear artistic talent that he was persuaded to study art. As a pupil of a Munich engraver, J. M. Enzing-Müller, he was influenced by the painting of Wilhelm von Kaulbach.

In 1848, with his parents and two brothers, Oertel moved to Newark, N.J., and began offering lessons in drawing. In 1851 he married Julia Adelaide Torrey, one of his pupils, and in the same year made plans for a series of four paintings that would depict the redemption of mankind. This was to be the great work of his life, and for nearly half a century he pursued this goal. During the period 1852–57 he was employed in engraving banknotes and painting portraits, and in 1857–58 he prepared designs for the painted ceiling of the U.S. House of Representatives. For a brief time during the Civil War he was with the Army of the Potomac, preparing to paint several war scenes. Later in the 1860s, while living in Westerly, R.I., he painted a picture known originally as Saved; or, An Emblematic Representation of Christian Faith. Afterwards known as The Rock of Ages, it was widely reproduced and distributed around the world. A faulty copyright entry denied Oertel the revenue that he might otherwise have received from this work.

Oertel worked in a variety of mediums. In addition to engraving and drawing, he painted in oil and water-colors, modeled figures, and carved wood. His subjects were human figures, animals, landscapes, flowers, and marine and still life. During a productive period of forty-six years, for nine of which he kept no records, he produced almost 1,200 major works.

After leaving Rhode Island, Oertel moved to Tarrytown, on the Hudson River, N.Y. While there, he and his family met a young art student, Laura Norwood, from Lenoir, N.C., who was an Episcopalian. Oertel had recently been confirmed in the Episcopal church and served as a lay reader before his ordination as deacon in June 1867. Miss Norwood impressed upon him the great need for an Episcopal clergyman in her home community. She also described a comfortable setting in which he might express his artistic talents and perhaps even find it possible to work on his projected masterpiece.

In 1869 Oertel, his wife, and their children moved to Lenoir, where he served St. James's Church and two nearby missions: the Chapel of Peace and the Chapel of Rest. In 1871, at Bishop Thomas Atkinson's urging, Oertel was ordained to the priesthood. Afterwards he established a school for girls in Lenoir where he, his wife, and daughter were employed as teachers. When the Episcopal church in Tarrytown bought a new organ, it sent the old one to St. James's. Oertel worked it over and installed it; he also carved a handsome reredos for the church in Lenoir, which is still in place. Concerned about the poor in his community, Oertel ordered groceries and supplies in large quantities from New York and generously distributed them to the needy. To supplement his meager income, he often traveled to Wilmington, Charlotte, and elsewhere in North Carolina as well as to Rock Hill, S.C., to paint portraits, leaving his wife and daughter to operate the school. For a few months in 1874 he was in charge of St. James's Church while the rector was away.

In 1876 Oertel was obliged, largely for financial reasons, to leave Lenoir and paint wherever he could find commissions: Florida, Washington, D.C., Sewanee and Nashville, Tenn., and St. Louis, Mo. In 1876 he completed the painting of a North Carolina centennial flag, commissioned by ladies of the state, to be displayed at the Centennial Exposition in Philadelphia. Returning to North Carolina in 1879, he was rector of Grace Church, Morganton, for eighteen months. In the period 1889–91 he was an instructor of fine arts at Washington University in St. Louis.

For the last eighteen years of his life, his sons made it possible for him to work without concern for earning a living, and it was during this period that he completed the "Redemption" series that he had so long anticipated. The Dispensations of Promise and the Law, The Redeemer, The Dispensation of the Holy Spirit, and The Consumation of Redemption were given to the University of the South at Sewanee, Tenn. In 1902 Oertel received an honorary doctor of divinity degree from the University of the South. His paintings and carvings are owned by the National Gallery, the Church of the Incarnation, and the National Cathedral in Washington, D.C., and by churches in New York City; Glen Cove, Long Island, N.Y.; Lenoir, N.C.; St. Louis, Mo.; Jackson, Tenn.; Emmorton, where Oertel served briefly as rector, and Belair, Md. His popular engraving, Pulling Down the Statue of George III by the "Sons of Freedom" at the Bowling Green, City of New York, July, 1776 (1859), is often reproduced. 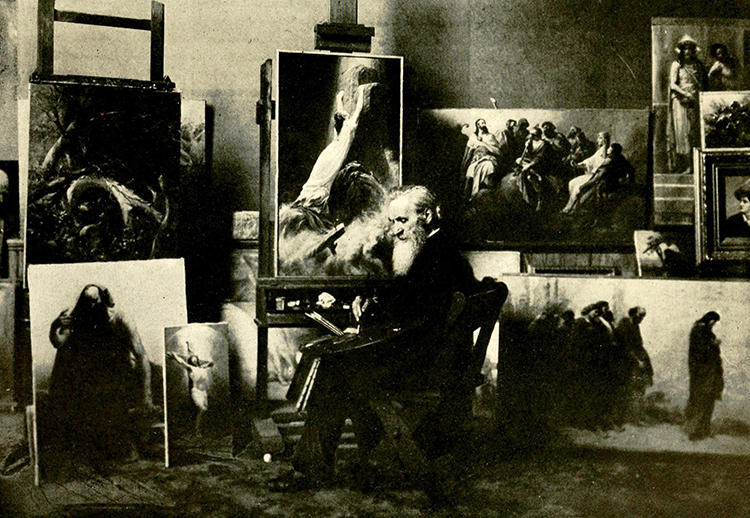