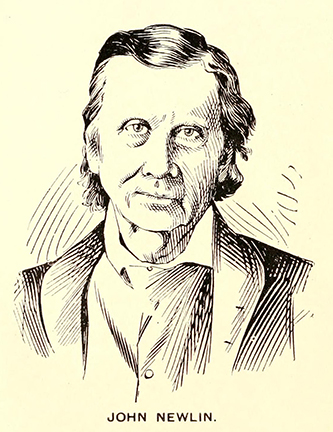 John Newlin, merchant, industrialist, land speculator, abolitionist, and Quaker leader, was born in the southeastern part of present-day Alamance County. He was in the sixth generation of descendants of Nicholas and Elizabeth Paggott Newlin, who emigrated from Mountmellick, Ireland, to Chester County, Pa., in 1683. His grandparents, John and Mary Pyle Newlin, bringing his father John, moved to North Carolina in 1768. His mother was Deborah Lindley Newlin, the daughter of Thomas and Ruth Hadley Lindley, natives of Ireland, who had moved to the same neighborhood from Pennsylvania. All of his ancestors and relatives were Quakers.

On 19 Apr. 1810 John Newlin married Rebecca Long. They made their home at the homestead of Newlin's grandfather, Thomas Lindley, near Spring Friends Meeting House, where John operated a mercantile business, a tanyard, and a leather business that made shoes and harnesses. It is said that he employed about twenty laborers in this work. Reputedly, he became the largest landowner in present-day Newlin Township.

Newlin's most noted venture was a textile mill at the site that became Saxapahaw. It was located on the eastern bank of Haw River, where in 1844 he and his sons James and Jonathan formed a partnership known as John Newlin and Sons. They erected a one-story brick building, fifty by two hundred feet, and in 1848 began the production of yarn for sale locally. In 1859 they enlarged the building by constructing two additional stories and added weaving and dyeing to their operations. Following the death of John Newlin in 1867, his sons took their cousin, George Guthrie, into the business, but in 1873 they sold the mill to Edwin M. Holt.

John Newlin was opposed to slavery and expressed this view by joining the Manumission Society of North Carolina, serving as a lobbyist during sessions of the General Assembly, and working with individuals to liberate their slaves. One of his efforts in the interest of manumission involved him in a long series of lawsuits. Mrs. Sarah Foust Freeman had come into possession of twenty-five to forty slaves through the will of her first husband. Before her second marriage, she and her prospective husband signed an agreement that left her in complete control of her slaves and other property. She and her first husband had discussed the possibility of freeing the slaves. After her second marriage, Newlin worked out an agreement with Mrs. Freeman by which he would take the slaves to free territory and there execute a deed of manumission for each of them. In her will she devised all her slaves to Newlin on his promise to carry out their plan for freeing them. On the death of Mrs. Freeman in 1839, persons claiming to be her heirs attempted, through a series of lawsuits, to break the will and secure possession of the slaves. Three of the suits went to the North Carolina Supreme Court. The last of these was in 1851, twelve years after Mrs. Freeman's death. During the years of those lawsuits, the litigation prevented Newlin from taking the slaves out of the state. A decision of the court finally cleared the way for him to take them to Ohio and set them free.

The Saxapahaw cotton mill was built during the period of litigation. It has been reported that Newlin used slave labor to dig a mile-long race from the dam to the mill, but such action on the part of a Quaker has been questioned. During the actual litigation no one accused him of using the slaves for his own profit, but there can be little doubt that he used them to cover the cost of their upkeep during the decade they were in his charge.

Further evidence of his stand against slavery may be seen in his service with several groups that went to Raleigh during legislative sessions to try to influence legislators to remove some of the obstacles to the manumission of slaves.

Newlin's interest in education was reflected in his appointment in 1834 as the first-named member of a committee to raise money for the erection of a building to accommodate New Garden Boarding School and to supervise its construction. The school began in August 1837 and half a century later became Guilford College.

John and Rebecca Long Newlin had ten children: James, Oliver, Jonathan, Cyrus, William, Mary Ann, Deborah, Thomas, Gulielma, and Nancy. He died at age ninety-one and was buried near his home in the Quaker cemetery at Spring Friends Meeting House.

Minutes of Spring Monthly Meeting of Friends (to 1867).

Algie I. Newlin, The Newlin Family: Ancestors and Descendants of John and Mary Pyle Newlin (1965).

Sallie Stockard, The History of Alamance (1900).