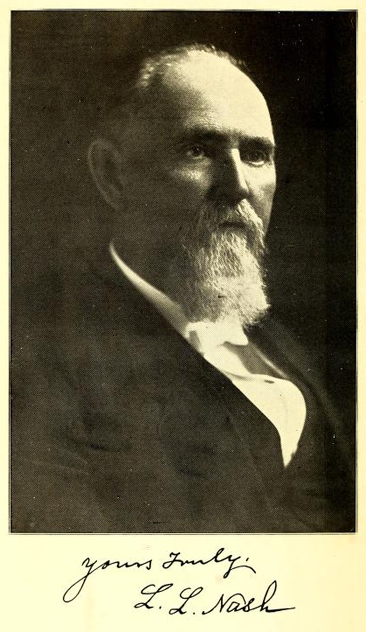 Leonidas Lydwell Nash, Methodist clergyman and author, was born in Chase City, Mecklenburg County, Va., the son of Hugh W. and Martha Jane Mullen Nash. He attended local public schools and for one year studied at a military school. In 1857 he moved with his parents to Franklin County, N.C. The Civil War denied him an opportunity for further education, and in 1864 he enlisted in the Junior Reserves. Nash saw service in guarding the railroad at Weldon and later was employed in the trenches around Petersburg. There is some suggestion that he served briefly as a private in the Twenty-fifth North Carolina Regiment, although surviving records do not mention him. He became ill from exposure in Virginia and was sent to a hospital in Raleigh. The war ended before he was able to return to duty. Back home, in 1866, he married Sarah F. Marks and they became the parents of a daughter, Rosa, who later married Wilmington merchant E. N. Penny.

During his recuperation, Nash determined to make the Christian ministry his lifework. He was an avid student of the Bible and had also devoted some time to reading law and studying medicine. After an examination by Methodist clergymen, he was accepted as a substitute minister for service in the Bath Circuit, Beaufort County, for two years. His wife died in 1872, shortly before he entered the ministry. In 1873 he married Louise Taylor of Beaufort County.

Nash formally joined the Conference of the Methodist Episcopal Church, South, in 1874 and continued his work in the Bath region. When his field of service expanded, he served a number of churches in eastern North Carolina. One of the largest of these was in Raleigh; although he found it in a declining condition, he was able to increase membership and to build a new sanctuary. Nash also served a large congregation in Wilmington, where he successfully reduced a large debt and made provisions for the payment of the outstanding portion. It was here that he edited a weekly newspaper, the Atlantic Methodist, whose income helped decrease the church's debt.

Several of Nash's sermons were printed for wider distribution. Regeneration was published in 1897, and Baptism: The Nature, Mode, and Subjects was issued without a date. A widely acclaimed biblical scholar, he also was the author of several books, including Spiritual Life (1898), Early Morning Scenes in the Bible (1910), The Christian Family (1915), and Recollections and Observations (1916).

During his later years, Nash resided in Hamlet and served the Conference as an evangelist. He traveled widely and held meetings and revivals on request. This was particularly satisfying for him as he enjoyed personal contacts. He also served on examining committees to approve the ordination of young men, and his fair but penetrating questions were long remembered.

By his second wife, Nash was the father of two sons: Marvin and Hugh. He was buried in Oakwood Cemetery, Raleigh.