William T. Muse, United States Navy commander and later Confederate States Navy commander, was born likely around 1800 in the northern coastal plain of North Carolina, in either Edenton in Chowan County or Pasquotank County, the son of William T. Muse, Sr. and Mary Blount.  Mary Blount, born in 1779, was a daughter of Joseph Blount II of Chowan, born 1755, and Lydia Bonner. John Wheeler reports in Reminiscences that Joseph Blount II was the son of Joseph I, born 1715, and Sarah Durant, a descendent of George Durant.  Wheeler recounts George Durant as the first English settler of North Carolina; he may be more accurately considered one of the first settlers of the Albemarle region, purchasing land in Virginia around 1661 or 1662. While Muse appears to have been a relatively minor figure in North Carolina history, he is significant for his role as commander of the Confederate North Carolina naval post at Wilmington and defense of the Cape Fear River and his role in the defense of Cape Hatteras during the Civil War.

Little is known about his education prior to embarking on a military career in the antebellum United States Navy. Muse began his career in the U.S. Navy on June 1, 1828 as a midshipman and had attained the rank of commander at the time of his resignation at the secession of North Carolina to join the Confederacy.  While serving in the U.S. Navy, he was promoted to lieutenant in 1841 by an order of the U.S. Congress to fill a post vacated by a Lieutenant John C. Sharpe following his court martial. In 1857 he participated the United States Coast Survey mapping of the Hatteras and Ocracoke Inlets as commander of the party conducting the hydrography of the survey. He appears to have commanded the Coast Survey steamer Hetzel during these efforts. 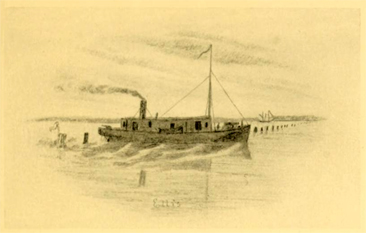 Upon entry into the Confederate States Navy, he was commissioned as Commander on June 24, 1861 and given charge of fitting out gun boats from the Confederate Navy yard at Norfolk, Virginia.  He was given command of the gunboat C.S.S. Ellis in 1861, sailing from Norforlk on August 2 and arriving at Ocracoke Inlet on August 4, 1861.  He was present with the ship in the defense of Hatteras on August 29, 1861. In October 1861, he was given command of the naval station at Wilmington until 1863. In 1863 he was given command of the ironclad C.S.S. North Carolina, serving on the boat in its defense of the Cape Fear River until his death on September 27, 1864 when it sank in the river after running aground from leaks resulting from teredo (shipworm) infestation in the wood of her hull.

Although Muse's connection to the University of North Carolina is unclear, he was listed in the 1852 Catalogue of the Philanthropic Society as an honorary member. Muse was also included in a number of North Carolina histories due to his discovery of a painted depiction of a caricature of the "Edenton Tea Party."  He was reportedly on the Island of Minorca some time in the 1820s when he discovered a painting on glass, possibly in the barbershop where he was having his hair cut, that turned out to be a caricature of the Edenton Tea Party. The picture he discovered was actually a reproduction on glass of a mezzotint illustration called "A Society of Patriotic Ladies, at Edenton in North Carolina." The illustration, by Philip Dawes, was published in March 1775 in a London newspaper and depicted the revolutionary resolves of the women of Edenton (known today as the "Edenton Tea Party") in unflattering light.

Muse bought the picture and reportedly presented it to a group of women in Edenton on his return. J.R.B. Hathaway recalled the painting being on display in the court house in Edenton during his own lifetime and that sometime later the glass was broken at which point Dr. Richard Dillard had a replica produced on canvas which he donated to the North Carolina State Library. Muse has received some historical credit for discovering the artfifact and resurfacing the story some fifty years after the original event in Edenton.

Wheeler reported in Reminiscences that W. T. Muse was married and left children at the time of his death in 1864. According to Wheeler, W. T. Muse had one brother, John B. Muse, who died unmarried.