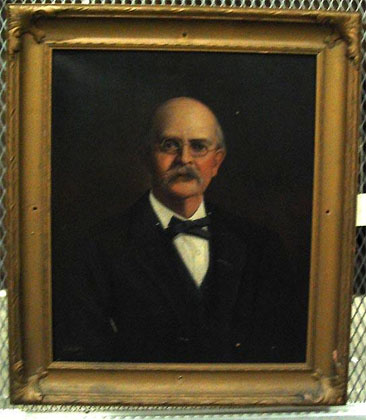 Hugh Morson, educator, was born near Fredericksburg, Va., the son of Dr. Hugh, a surgeon in the U.S. Navy, and Rosalie Lightfoot Morson; earlier Morsons emigrated from Scotland. Morson prepared for college at the academy of Judge Coleman of Fredericksburg. Entering the University of Virginia in 1869, he obtained diplomas in chemistry, moral philosophy, Latin, Greek, and modern languages in 1871 but did not earn a titled degree. During the latter year he tutored in the family of Colonel Thomas Carter of King William County, Va. In 1874 Morson moved to Hillsborough, N.C., where he taught Latin and Greek and was assistant principal in the military academy of Horner and Graves.

In 1877 he began teaching in Raleigh in the school of the Reverend J. M. Atkinson, a Presbyterian clergyman, and his son-in-law, Major Charles D. Scott. The next year Morson assumed leadership of the Lovejoy Academy (named for Jefferson Madison Lovejoy, a native of Vermont), on Burke Square, with John Fray, a former Confederate army officer, marking the onset of the Raleigh Male Academy. When construction of the Executive Mansion began on Burke Square, the academy moved into a new building (completed in 1891) on a block diagonally southeast from the old site, bounded by Jones, Bloodworth, Edenton, and East streets. The partnership with Fray ended with Fray's death in 1885. Captain Claude B. Denson, another former Confederate army officer, then became joint master, and for thirteen years the Morson-Denson Academy was considered to be the leading school for boys in Raleigh because of its high scholastic standards. After Denson's death, Morson maintained the Raleigh Male Academy until he assumed the principalship of Raleigh High School when it opened on 18 Sept. 1905. The new public high school first occupied six rooms in the Centennial School on lower Fayetteville Street. By 1920 Morson was principal emeritus, but he continued to carry a full load of classes as a Latin teacher. When his health failed in 1924, he relinquished all duties and took a leave of absence. 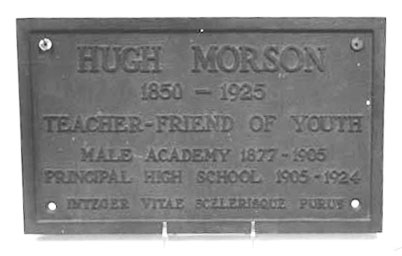 In 1879 Morson married Sallie Todd Field (1852–1932) of Front Royal, Va. They resided in the Oakwood section of Raleigh and were the parents of four children: Harriet (1880–1966), Hugh Alexander (1881–1956), William Field (1885–1964), and John Lightfoot (1888–1969). Morson was a member of the Church of the Good Shepherd, where he served as junior warden (twenty-five years), senior warden, secretary of the vestry, and Sunday school teacher. He also was secretary of St. John's Guild and a founding spirit of St. John's Hospital, Raleigh's first hospital. He was buried in the family plot at Oakwood Cemetery.

On 2 Sept. 1924, a new high school, designed by C. Gadsden Sayre and located at 301 East Hargett Street, was named in his honor. The initial act of the parent-teacher organization, formed in 1925, was to present the school with an oil portrait of Morson. In 1955, when the city school system was reorganized, Hugh Morson High School became a junior high school; in 1965 the building and lot were purchased by the federal government and the school was discontinued.