See also:  Guilford College (from the Encylopedia of North Carolina) 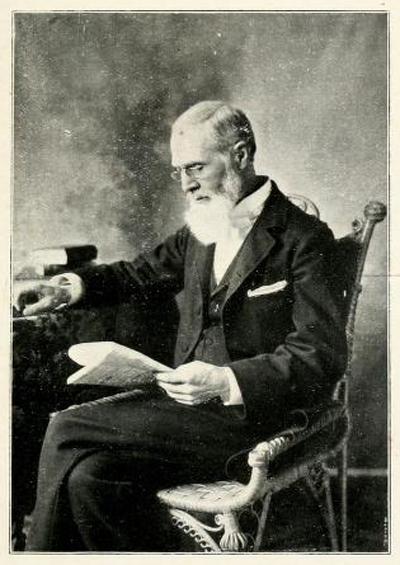 Joseph Moore, scientist, educator, Quaker minister, and college president, was born in Washington County, Ind., the son of John Parker and Martha Cadwalader Moore and the grandson of Joseph and Peninah Parker Moore, who migrated from eastern North Carolina to Indiana in 1819. After attending county schools, he entered Friends Boarding School in Richmond, Ind., in 1853. Moore began teaching at age eighteen in a county school, then at Blue Ridge Seminary, and in 1852–53 at still a third school. He served as assistant teacher while a student at Friends Boarding School from 1853 to 1859. Entering Harvard University in 1859, he studied under Louis Agassiz, earning a B.S. degree in 1861. He was awarded an honorary M.A. degree by Haverford College in 1869 and an honorary LL.D. degree by Indiana State University in 1882.

Recorded as a Quaker minister on 22 February 1865, Moore became one of the denomination's most influential traveling clergymen, particularly as a scientist who interpreted all knowledge—both natural and moral—as having a unitary, divine source. After spending four years at Friends Boarding School (which had become Earlham College in 1859) as a science professor, he accepted an appointment in late 1865 as superintendent of education for the Baltimore Association of Friends. In that capacity, he supervised a Reconstruction program in North Carolina, combining the rebuilding of its educational program with the total life of the Society of Friends, most of whom were farmers.

According to Governor Jonathan Worth, Moore became a major influence in North Carolina in surveying postwar conditions, rebuilding schools, training teachers, organizing Bible as well as public schools, and using his "magic lantern" as a visual aid in teaching geography, zoology, and astronomy throughout the state. He combined his assets and interests as scientist, teacher, minister, and even "showman" to encourage the development of education in North Carolina in one of its most critical periods. His teacher training program at Springfield Normal School near High Point—believed to be one of the earliest in the state—helped to prepare for the establishment of the State Normal and Industrial School (now the University of North Carolina at Greensboro).

Moore went back to Richmond, Ind., to serve as president of Earlham College from 1868 to 1882; meanwhile, he continued to teach in his special scientific areas. Always involved in the collection of specimens, he received a year's leave of absence in 1875–76 to visit the Sandwich Islands in Hawaii, arriving home with barrels of new exhibits for his constantly growing museum.

Returning to Greensboro, N.C., Moore served the state's best known Quaker institution, the New Garden Boarding School, from 1883 to 1888. He spent the first year traveling to raise funds and support for the expanding program envisaged for this "Friends School in North Carolina." During the next four years he was its principal, preparing the curriculum and faculty for its transition into a four-year liberal arts college, Guilford, in 1888. He was offered its first presidency, but chose to return once again to Earlham, where he could devote the remainder of his life to the sciences and to the important museum that later was given his name. He had already become recognized, in the words of Agassiz, as "the best scientist west of the Alleghany Mountains."

Moore had also become one of the most creative and influential educators during the Reconstruction era, both in North Carolina and Indiana, his two ancestral home states. At a time of growing opposition between science and religion, his career as a leading scientist and museum curator, combined with that as educator, administrator, and Quaker minister, made him one of the major positive forces in both private and public education.

In 1862 he married Deborah Ann Stanton of Springboro, Ohio. She died in 1864 after the birth of a son. In 1872 he married Mary Thorne of Selma, Ohio, and they had three daughters and a son. Moore's portrait hangs in the School of Religion at Earlham College.