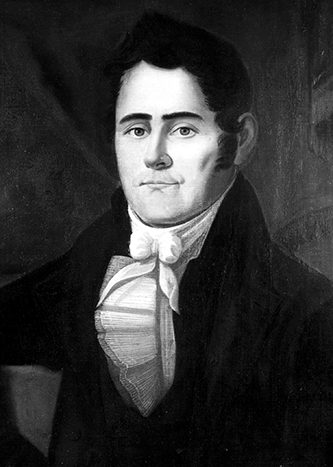 William Miller, governor, legislator, and diplomatic agent, was born in Warren County, the second son of Thomas Miller, Jr., and his first wife, who appears to have been a daughter of Allen Love of Brunswick County, Va. His grandfather, Thomas, moved to North Carolina sometime between 1766 and 1771; his father, the younger Thomas, was co-partner in a firm of merchants and owned extensive land and slaves in both Virginia and North Carolina. At age nine, when his father died, William Miller inherited a plantation of 930 acres. Having apparently attended the Warrenton Male Academy conducted by the Reverend Marcus George, Miller enrolled at The University of North Carolina in 1802 but did not remain until graduation. By 1809 he was living in Warrenton, where he owned property and probably was practicing law. About this time he may have met his future wife, Lydia Anna (or Lydiana) Evans, of Chesterfield County, Va., as she was a student in 1809–10 at Jacob Mordecai's Warrenton Female Academy.

Governor David Stone named Miller attorney general in 1810 to serve several months to complete the term of Oliver Fitts, also of Warren County, who resigned. Miller also served four terms (1810–13) in the General Assembly and as speaker during two of them. Elected to a fifth term, including the speakership for a third time, he resigned before assuming his duties after his election as governor.

Miller was governor for three terms (1814–17). This placed him in a position of considerable importance, as he served during the War of 1812, when he backed the war measures of President James Madison. It was also during his term that the Antonio Canova statue of George Washington was commissioned for the state capitol. Miller supported the first tentative steps towards a system of public education when he advocated creation of the Literary Fund for that purpose. He lent his efforts to improve transportation in the creation of a similar fund for internal improvements, and he favored humanizing the penal code. The organization of the first North Carolina Supreme Court in 1818 followed Miller's recommendation of Judge John Hall as one of the first two justices to organize such a tribunal.

In 1816, while he was governor, Miller married Lydia Anna Evans and they moved into the new Executive Mansion at the southern end of Fayetteville Street in Raleigh. At the expiration of his third term, they moved to Warrenton; Mrs. Miller died in March 1818 at Oaklands, the home of her father near Petersburg, Va. Their only child, William, Jr., was dead by 1824. Miller returned to Raleigh to represent Warren County in the senate during the 1821–22 session, and in March 1825 he was named by President John Quincy Adams to succeed the late Thomas N. Mann as diplomatic agent to Guatemala. Unfortunately Miller, like his North Carolina predecessor named to this post, died en route. After three days of illness from yellow fever, Miller died at Key West, Fla.; he probably was buried at sea, as the secretary of the legation accompanying him did not report his death to the State Department until the ship reached Havana eleven days later.

There is a portrait of Governor Miller, with a view of the then state capitol visible in the background, in the Philanthropic Society hall at The University of North Carolina.