Menatonon, king of the Chowanoc Indians, was old and infirm in his limbs when Governor Ralph Lane explored the Chowan River in the spring of 1586. Both the English and the Indians regarded him as the wisest and most influential ruler among the Algonquian-speaking natives from the Neuse River in presentday North Carolina to the Chesapeake Bay and Powhatan Confederacy. His age cannot be accurately determined, but it may be observed that his son, Skiko, had attained manhood. Menatonon was able to give the English information about places nearby as well as those at a great distance. His name may have meant "he listens carefully to someone (something) which he sees."

Unmistakably, Thomas Harriot had in mind Menatonon and the Chowanoc Confederacy when he said that the "greatest wiroans or chief lord" had eighteen towns in his government, whereas in some parts there were chief men who ruled only one. Moreover, the English already had explored the coastal region and found the towns to be small and scattered. They had but little corn which, together with vegetables, was necessary to sustain a large and stable population.

Harriot explained that the greatest ruler could put only seven or eight hundred fighting men in the field. His estimate was more conservative than that of Lane, who said that the town of Chowanoc itself could field seven hundred warriors. (Archaeological excavations in the 1980s suggest that the town of Chowanoc was around one thousand years old at that time.) Various scholars have estimated the combined population of the town and province to be between 1,500 and 2,500. Both Arthur Barlowe and Ralph Lane indicated that Menatonon's town of residence was on the upper Chowan River. Barlowe referred to one Pooneno as being ruler of Chowanoc on a river called Nomopana, but when Lane had a personal look he made no mention of him. Thus Pooneno may be regarded as one of many subchiefs.

The explorers found that as they moved inland, the country became as good as the coastal Indians had represented it to be. Harriot said that farther in the interior "we found the soil to be fatter, the trees greater and to grow thiner, the ground more firm and deeper mould, more and larger champions [potatoes?], finer grass . . . more inhabited with people, and of greater policy and larger dominions, with greater towns and houses." 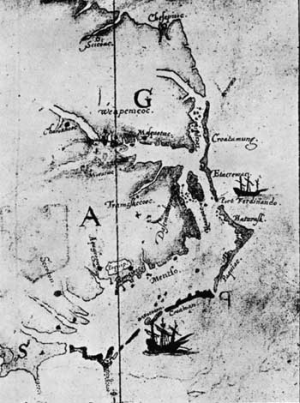 Lane indicated that the Chowanoc Confederacy commenced near the mouth of the Chowan River; the map of John White and Theodor De Bry shows it extending to the north of the confluence of the Chowan and Meherrin rivers. The northern bounds were confirmed by John White and William Strachey of the Jamestown colony. The Virginia Indians told Smith that the "Chawwonocke" lived "one daies journey" from the Nansemond tribe on the Nansemond River, and both Smith and Strachey mentioned the "Chowanokes" or "Chawonocks" as one of the nations that bordered the Powhatan territories on the south.

Inasmuch as the English named only seven Indian towns on the Chowan River, it is likely that some of the eighteen mentioned by Harriot were situated on the stream's larger tributaries such as Bennetts Creek and the Wiccacon and Meherrin rivers. Numerous Indian town sites of the Late Woodland period have been located on these streams.

Lane referred to the Chowanocs as being friendly, but he took no chances. That he and his men might not fall victim to some sort of treachery, he held Menatonon "prisoner with me" during the two days they spent at the chief's town. He then took the king's son, Skiko, to Roanoke as a hostage. Lane found Menatonon to be "a very grave and wise man, and of a very singular good discourse in matters concerning the state, not only of his own country, and the disposition of his own men, but also of his neighbors round about him, as well far as near, and of the commodities that each country yielded." When Menatonon and the other chief men of the Moratocs learned that the English were interested in precious metals and pearls, they told them the kind of tales they wished to hear. A great king and his men harvested huge quantities of pearls from waters of the Northeast, and this king had visited Menatonon two years earlier.

More alluring still was the fable of Chaunis Temoatan, which Menatonon related to Lane. It was a place "notorious to all the country." A mine supplied this country with "a marvelous and most strange mineral." The Indians called the mineral wassador (probably copper), and it was a valuable trade item among them. But the English had learned that the Indians called all metals by this name, and that they had no particular names for gold or silver; moreover, this Chaunis Temoatan metal was soft and pale red like gold. An aborted journey up the Roanoke River left the strange metal still a mystery. It would fascinate the English for more than a century.