Griffith John McRee, author of the Life and Correspondence of James Iredell, an associate justice of the U.S. Supreme Court, was born in New Hanover County, the older son of Dr. James Fergus, of Scottish and Scotch-Irish descent, and Mary Ashe Hill McRee, the daughter of William H. Hill and the granddaughter of John Ashe. He was the nephew of colonels William and Samuel McRee and Joseph Alston Hill. Young McRee was educated at academies in Pittsboro and Raleigh and at Princeton, from which he was graduated in 1838 in the same class with Lawrence O'B. Branch. In 1842 he married Penelope Johnston Iredell, the daughter of Governor James Iredell and the granddaughter of Judge James Iredell, Revolutionary leader and U.S. Supreme Court justice. 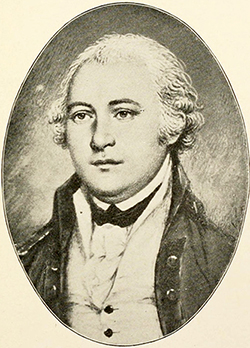 McRee practiced law in Wilmington, operated a rice plantation at Schawfields north of the city, and was an unsuccessful Whig candidate for the General Assembly in 1844. His avocation, however, was writing. His known antebellum productions, other than his major work on Iredell, include poetry that appeared in the Wilmington press; some still-interesting humorous sketches satirizing local foibles, published in a pamphlet entitled Squibs (n.d.); a sketch of Cornelius Harnett (Raleigh Register, 3 Aug. 1844); an account of colonial Wilmington (Wilmington Chronicle, 2 and 16 Sept. 1846); A Memoir of Major Griffith J. McRee of the Continental Line of North Carolina (n.d.), about his grandfather; "An Exposition of Major McRee's Differences with General Greene," unpublished; a memoir of John Alexander Lillington (ca. 1854), unpublished until it appeared in the University of North Carolina Magazine (new ser., 8 [1888]); A Memoir of General John Ashe, of the Revolution (1854), in collaboration with Archibald MacLaine Hooper; and a memoir of Hooper (U.N.C. Magazine 4 [February 1855]). His public lectures on Timothy Bloodworth (1855) and on the ratification of the U.S. Constitution in North Carolina (1857) are lost, but a manuscript of a lecture on the Regulators, given in 1860, has survived.

McRee's interest in the history of North Carolina was first aroused by family papers and by numerous associations of local places and families with events of the Revolution. The interest was further stimulated by exchanges with David L. Swain and Eli W. Caruthers. In his Life and Correspondence of James Iredell, McRee hoped to substantiate the contributions of North Carolina to the Revolution, which he thought had been slighted, as well as to redeem the low intellectual reputation of the state. The two-volume work on Iredell, published in New York by D. Appleton and Company (1857–58), was paid for out of his own pocket. It earned what was for the author disappointingly small recognition in North Carolina. However, it brought McRee invitations to membership in the New England, New York, and Wisconsin historical societies in his own day, and it has remained a useful work. Combining Iredell's letters, diary, and public papers of the colonial, Revolutionary, and early national eras with McRee's own research and interpretations, it certainly made public much otherwise unknown material, and it was possibly the most significant historical work produced in antebellum North Carolina. In his skill and integrity as an editor of documents, McRee equaled or surpassed the standards of the time. A graceful style free from the excessive ornamentation of the period, a critical and at times even ironical spirit, and the relative moderation in the expression of his family, state, and sectional feelings made McRee, as a historian, a match for a number of his better-known contemporaries.

Despite the strong Federalist-Whig tradition of his family, McRee viewed secession optimistically. He entered the Confederate army but, chronically in bad health, served as a clerk. His only known postbellum writings are some unidentified contributions to Francis S. Drake's Dictionary of American Biography Containing Nearly Ten Thousand Notices (1872). At age fifty-two he died of "consumption." An Episcopalian, he was survived by six children. No likeness has been found, but McRee was described in youth as short and thickset, good-natured and humorous. He was buried in a vault at Hilton, his father's and once Cornelius Harnett's plantation. About 1904 the remains were moved to an unmarked grave in Oakdale Cemetery, Wilmington.