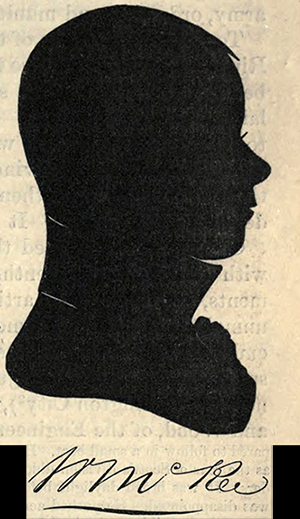 William McRee, career army officer, was born in Wilmington, the oldest son of ten children of Major Griffith J. McRee, of the North Carolina Continental Line, and his wife, Ann Fergus. Two of his brothers, Griffith John and James Fergus, became physicians; another brother, Samuel, entered the army and rose to the rank of major during the Mexican War; and a sister, Margaret Ann, married one Dr. Morrison who was a naval surgeon.

McRee attended Bingham's Academy at Pittsboro and in 1803, after his father's death, received an appointment to the U.S. Military Academy at West Point. After his graduation he was commissioned second lieutenant of engineers on 1 July 1805. Various promotions and assignments followed, including first lieutenant (1806), commander of the Engineer Department at Charleston, S.C. (1807), captain (1808), and major (31 July 1812).

At the outbreak of war with Great Britain in 1812, McRee was given charge of completing the fortifications of Fort Jackson at Savannah and of rebuilding Fort Wayne. From there he was sent to Charleston to construct a military hospital. Consulted by General Thomas Pinckney as to the ordnance necessary to seize St. Augustine and blockade the harbor, the "principal Engineer in this Department," as McRee was called, gave a critical estimate that persuaded Pinckney not to be hasty. He was highly regarded by the general, who praised his "talents and experience" when McRee was transferred to the northern front.

Appointed chief engineer and chief of artillery for Major General Wade Hampton in 1813, McRee took part in the abortive attacks along the Châteauguay River near Montreal. In the campaigns of the following year under the command of Major General Jacob Brown, he distinguished himself in the Battle of Niagara, for which he was brevetted lieutenant colonel, and in the defense of Fort Erie, for which he was brevetted colonel. In addition to serving as a staff officer and adviser to his commanding general, McRee constructed a bridge across the Chippawa River prior to the battle of that name, planned the capture of British artillery on the heights of Niagara, occasionally manned a piece of artillery during battle, and supervised the construction of American fortifications at Fort Erie. On 23 Aug. 1814 Brigadier General Edmund P. Gaines wrote: "To Major McRea [sic ], chief engineer, the greatest credit is due for the excellent arrangement and skilful execution of his plans for fortifying and defending the right, and for his correct and seasonable suggestions in regaining the bastion." Brown spoke of his "high military talents" and regarded him as "worthy of the highest trust and confidence." General Winfield Scott, reminiscing in 1843, said of McRee, with whom he had served, "In my opinion and perhaps in that of the whole Army he combined more genius and military science with high courage than any other officer who participated in the War of 1812."

With the treaty of peace came a reduction of the army and thereby little opportunity for advancement. In a postwar assignment, McRee was sent to Europe in 1815 to examine foreign military schools and fortifications and to purchase books for the West Point Library. In 1816 the United States invited the French general, Simon Bernard, to give the government advice on American fortifications; McRee was a member of the committee assigned to assist him, but he considered himself to be more qualified for the work than Bernard. He did not receive a lineal commission as lieutenant colonel until 12 Nov. 1818, while he was a member of the Board of Engineers for projecting a system of Atlantic coastal defense as a part of this program. It was perhaps largely because of his lingering unhappiness about the naming of a French officer over him that McRee, on 31 Mar. 1819, resigned his commission.

As a civilian McRee held the post of surveyor general of the United States for the Illinois, Missouri, and Arkansas territories. He also served as U.S. commissioner for locating the "National Road" west of the Ohio River. His letters written from the West are filled with interesting and descriptive detail.

McRee never married, lived frugally, assisted his friends, and bought and read a great many books. He admired the military careers of Julius Caesar, Napoleon, and Frederick the Great; he also venerated the law and, perhaps oddly, was fond of the poetry of Lord Byron. Described as being "below the ordinary stature," pale, with a high forehead, gray-blue eyes, and a "prominent, straight and handsome nose," his dress was "remarkably plain." He was reportedly modest and shy, of no political persuasion, grave and dignified. He died of Asiatic cholera at St. Louis, Mo., on the eve of his appointment to survey the boundary between the United States and Mexico. He was buried in St. Louis. There is a silhouette of him in Benson J. Lossing's Pictorial Field Book of the War of 1812 (1868).

Biographical Register of the Officers and Graduates of the U.S. Military Academy, vol. 1 (1891).

Lossing, Benson John. The pictorial field-book of the War of 1812 : or, Illustrations, by pen and pencil, of the history, biography, scenery, relics, and traditions of the last war for American independence. New York : Harper. 1869. 803. https://archive.org/stream/pictorialfieldbo00lossuoft#page/802/mode/2up

"Wm McRee." The pictorial field-book of the War of 1812 : or, Illustrations, by pen and pencil, of the history, biography, scenery, relics, and traditions of the last war for American independence. New York : Harper. 1869. 803. https://archive.org/stream/pictorialfieldbo00lossuoft#page/802/mode/2up