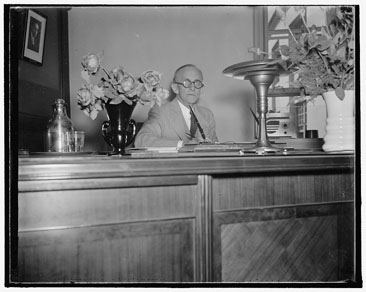 Frank Ramsay McNinch, attorney and government official, was born in Charlotte, the son of Franklin A. and Sarah Virginia Ramsay McNinch. At age seventeen, after a period of study at Barriers Military Academy in Charlotte, he became a salesman for a local grocery firm; this was followed by further employment as a salesman for a Richmond mercantile business and then for a New York company. Altogether, McNinch spent four years as a traveling salesman. After studying law on his own, he enrolled in the law course at The University of North Carolina in 1898 and was licensed to practice in January 1899.

After opening an office in Charlotte, his practice slowly grew. In 1904 he was elected to the General Assembly and during the 1905 session led the Prohibition forces in a highly successful temperance program; he was also responsible for making the divorce laws of the state much stricter. Fascinated by politics, he thereafter took an active part in numerous campaigns even though he was not a candidate for office himself. He did, however, serve as mayor of Charlotte from 1917 to 1921. In the latter year he resigned as mayor to become the regional director of the National Recreation Association of America.

McNinch seems to have been a particularly able orator at a time when political speaking was very important. Although he was a Democrat, during the presidential campaign of 1928 he played a leading role among members of his party who supported the Republican candidate, Herbert C. Hoover, against Alfred E. Smith. Smith's position as a "wet" and his Catholicism, many North Carolinians concluded, made him unacceptable, and McNinch encouraged defection from the Democratic party standard.

President Hoover, a Republican, was required by law to name one member of the opposite party to the Federal Power Commission and he chose McNinch. Appointed in 1930, the North Carolinian proved to be a very capable member and President Franklin D. Roosevelt, a Democrat, reappointed him. There were objections by leaders of the Democratic party in North Carolina to the initial appointment because of McNinch's failure to support the party in 1928. McNinch became chairman of the commission in 1933, however, and served until 1937. In that position he was a strong supporter of the president's program to provide cheap power to all the people. In 1935 he was the U.S. representative to the World Power Conference at The Hague, the Netherlands. As chairman of the Federal Communications Commission from 1937 to 1939, he steadfastly opposed any form of censorship of radio. He also supported the granting of equal prime time for the airing of opposing points of view. In an address in Chapel Hill on 26 Jan. 1939, he said: "A broadcaster's duty is to see that his station is never used by persons or groups especially interested in some public question in such a way that his station's listeners are left without sufficient information to make their own independent judgments on questions they should help to decide." From 1939 until 1946, when he retired, he was special assistant to the attorney general.

In 1905 McNinch married Mary Groome of Greensboro, and they became the parents of Frank R., Mary Groome, and Ariel. Following his wife's death he married Huldah Groome, and they were the parents of Huldah and Robert Groome. A Democrat and a Presbyterian, McNinch was a Mason and belonged to a number of other fraternal organizations. He was buried in Charlotte.