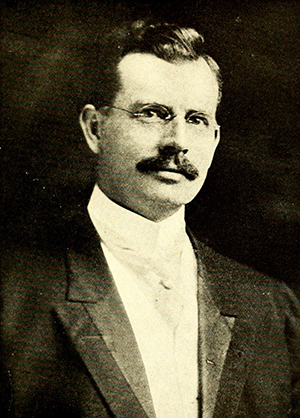 Alexander Jeffrey McKelway, clergyman, social reformer, and journalist, was born in Salisburyville, Pa., the son of John Ryan and Catherine Scott Comfort McKelway. His father, a Presbyterian minister in Albemarle County, Va., was sympathetic towards the South during the Civil War but was persuaded by his fiancée not to enlist because his father was in the Union army. John R. McKelway died when his son was four, and his mother took Alexander and his brother to Charlotte County, Va., where they grew up in the home of their grandfather, David Comfort. Catherine McKelway taught school and was largely responsible for Alexander's early education.

Graduated from Hampden-Sydney College in 1886, McKelway taught for a time in Virginia and Georgia before entering Union Theological Seminary. Following his graduation in 1891 he was ordained by the Albemarle Presbytery in North Carolina. In the summer of that year he married Lavinia Rutherford Smith, the daughter of one of the seminary professors. He began his ministry in home mission work in Smithfield, N.C., where he organized a church, but the next year, when he was just twenty-six, he accepted a call to the large First Presbyterian Church in Fayetteville. Here his assignment in home missions introduced him to cotton mills and their workers, and he became concerned about conditions that came to his attention. One of these was the abuse of alcohol. McKelway took the lead, with the assistance of other Fayetteville ministers, in distributing blank petitions in support of liquor regulation in the county. Thousands of voters signed, and the petitions won the approval of the General Assembly.

In part because of his feelings for the welfare of the working class, McKelway became superintendent of home missions in the Synod of North Carolina. A series of articles on church history that he wrote in 1896 for the North Carolina Presbyterian (later the Presbyterian Standard ) brought him to the attention of denominational leaders. Two years later he was named editor of the journal, the state organ of the church, and he moved his family to Charlotte where it was published.

From this base and through this organ McKelway became a lifelong "advocate of every reform." He was described as "the friend of education and of temperance and of social purity." His particular concern, however, was "the tender care of the little ones." He began a random series of editorials opposing the labor of young children in mills for long workdays and under unhealthy conditions. For his work in this area Davidson College awarded him an honorary doctor of divinity degree in 1900. In 1902 he also began to agitate for and support others who favored legislative protection for working children.

In 1903 an opportunity came to expand his influence when he became editor of the Charlotte News, and he broadened his field of concern to include the whole South. In that year the North Carolina General Assembly passed a weak law, with no enforcement provisions, prohibiting the employment of children under twelve and establishing a maximum sixty-six-hour week for children under eighteen. In 1904 a National Child Labor Committee was formed and McKelway became the southern secretary. The following year he resigned as editor of the Presbyterian Standard to devote the remainder of his life to the protection of working children. He lived in Atlanta from 1907 to 1911 and thereafter in Washington, D.C.

With the support of Raleigh newspaper editor Josephus Daniels and former governor Charles B. Aycock, McKelway began a vigorous campaign that eventually resulted in an effective law raising the age limit for employing young people in mills, limiting the hours of work, and requiring school attendance as a condition for working. Far from ideal, of course, these provisions were superior to earlier ones and were built upon by subsequent advocates. In 1919, the year after McKelway's death, the General Assembly created a Child Labor Commission.

McKelway was the author of many pamphlets and tracts. While living in Charlotte he also was one of three ghostwriters of Daniel A. Tompkins's History of Mecklenburg County, published in two volumes in 1903. Survived by his wife and five children, he was buried in Charlottesville, Va.

Minutes of the One Hundred and Sixth Annual Session of the Synod of North Carolina (1919).

McKelway, Alexander Jeffrey;  Seddon, A. E;  Ulm, A. H.; and Hine, Lewis Wickes. Child Labor in the Carolinas: [A]ccount of Investigations Made in the Cotton Mills of North and South Carolina, by Rev. A. E. Seddon, A. H. Ulm and Lewis W. Hine, under the Direction of the Southern Office of the National Child Labor Committee. [New York]: [National Child Labor Committee], [1909]. Documenting the American South, University of North Carolina at Chapel Hill. https://docsouth.unc.edu/nc/childlabor/menu.html (accessed July 23, 2013).