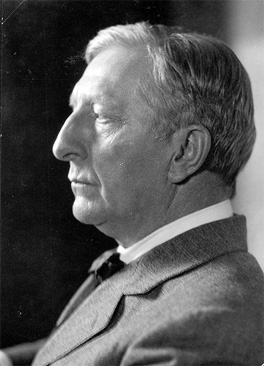 William McDougall, psychologist, was born in Lancashire, England, the son of Rebekah Smalley and Isaac Shimwell McDougall. He was a precocious child, and his Scots father enrolled him at fifteen in the newly established University of Manchester, where he studied science—particularly biology and paleontology. McDougall was graduated with first-class honors in 1889 but, dissatisfied with a merely provincial training, he won a scholarship to St. John's College, Cambridge, in 1890. The next four years were decisive for his development. He took a medical degree, specializing in physiology, and received a double First in the natural science Tripos. The result was to nurture a tendency towards what he himself came to see as a characteristic intellectual arrogance. In 1894 he went up to St. Thomas's Hospital, London, for the final three years of study for the M.B. and did research with C. S. Sherrington; at the same time, he encountered William James's Principles of Psychology, which convinced him that a full understanding of human nature would have to proceed from psychology and anthropology fused with physiology. A year's service on an expedition to the Torres Strait and Borneo convinced McDougall that "field" anthropology was "too easy" for him, and he turned to psychology. In 1899 he married Annie Aurelia Hickmore.

The years from 1900 to 1914 were perhaps McDougall's most productive. After spending a year in Göttingen with G. E. Müller (at work on the psychophysics of color vision), he returned to England to give a course in laboratory methods in psychology at University College, London. His own research developed along two lines: his basic empiricism led to further psychophysical research, and his Jamesian tendencies led to more speculative papers on the general functioning of the brain. In 1904, in search of an audience, he applied for and was appointed to the post of reader of moral philosophy at Oxford; his lectures ranged over the whole of psychology, broadly conceived. The position involved no experimental work, but he found space in the physiology laboratory where he could pursue his private research. In these years McDougall helped literally to create psychology as a professional discipline in Britain: he was one of the principal organizers of the British Psychological Society in 1901 and an associate editor of the society's Journal from its establishment in 1910. The small group of students who clustered around him at Oxford became the first generation of professional psychologists in Britain, including J. C. Flugel, William Brown, Cyril Burt, and others.

At this point his first books appeared, two of which deserve particular mention for their originality and for the light they throw on McDougall's mind. Coupled with his "intellectual arrogance" he exhibited a nearly habitual skepticism of established doctrine. In his second book, Introduction to Social Psychology (1908), McDougall first proposed his hormic theory of psychology, emphasizing the purposive aspect of behavior and insisting on the presence of innate dispositions or instincts within animals; for much of his life this hormic theory was a major competitor to associationist and behaviorist psychology. Body and Mind (1911), subtitled A History and Defense of Animism, remains perhaps the strongest case for the existence of mind and its role in human development.

When the war broke out in 1914, McDougall was made an officer in the Royal Army Medical Corps and had to leave moral philosophy for the treatment of shell-shocked patients. But when he returned to Oxford in 1919, he was still among the most eminent British psychologists.

In 1920 McDougall accepted the chair of psychology at Harvard—attracted by the prestige of the position that had been James's and Hugo Münsterberg's, and by the promise of equipment and students. Yet it was a profoundly tragic decision. McDougall found the students at Harvard to be thoroughgoing mechanists in psychology, unsympathetic to his own ideas. Cambridge he disliked, as a "noisy, Irish city," and Harvard itself did not provide for its faculty as he thought proper. Finally, the arrogance and iconoclasm that had been acceptable in England were looked on with suspicion in America. His various unorthodoxies—eugenics, psychical research, animism, his book The Group Mind (1920)—and the antimaterialist tenor of his thought caused him to be regarded by many of his colleagues as the defender of reactionary viewpoints in both the social and scientific realms. (The most ambitious of his unorthodox projects was a long-term experiment to test the Lamarckian theory by seeing whether the effects of training could be inherited from one generation of rats to the next. Begun in 1921, the experiment was studying the fiftieth generation at McDougall's death.) His importance as a psychologist went largely unquestioned to the end of his life, but his actual influence on the development of psychology, so decisive in England, was much less obvious in his American years.

When President William P. Few of Duke University wrote McDougall in 1926 asking for the names of psychologists who might be approached to head the new psychology department at the school, McDougall suggested his own. By the fall of 1927 he was in North Carolina. Here he was more nearly content. As one of the most eminent scientists at Duke, he was widely courted by the university community. McDougall took pains to build up around him a department of younger men who shared his commitment to a purposive psychology—scholars like Helge Lundholm, Karl Zener, and Donald Adams. He carefully arranged for them a light teaching load of the courses they wanted in order to leave them free for research; in turn, they revered him. His own stream of publications did not slacken. Now much of his energy was given over to writing books that systematized or developed his earlier ideas; his only experimental work of note was the continuing Lamarckian experiment. In 1928 McDougall hired a young botanist, J. B. Rhine, to help him with the Lamarckian project. Rhine had gone to Duke hoping to begin a career in psychical research, and the next year McDougall found him a teaching position in the department. Rhine had already begun a program of parapsychological investigation, with McDougall's approval, and when Rhine's first book, Extra-Sensory Perception, appeared in 1934, McDougall wrote an enthusiastic preface.

Beginning in 1932, McDougall spent half the academic year in England, but he continued to play an active role at Duke for the other half. He refused to let his increasing deafness prevent the intellectual exchanges to which he was committed. The cancer that caused him great suffering in his last year did not stop him from teaching—or from working on his last book, The Riddle of Life —until shortly before his death, and he was careful to record a series of observations on his pain.