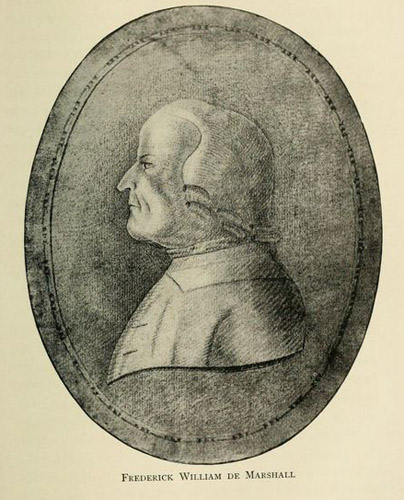 Frederic William Marshall, senior civilis of the Moravian church, oeconomus (chief administrator) of the Wachovia settlement, town planner, and architect, guided the development of Salem from a wilderness to a thriving community by the end of the eighteenth century. His given name was Friedrich Wilhelm von Marschall, but he liked using the English language and often wrote his name with the English spelling, which frequently appears in the Moravian records. Called the "Father of Salem," Marshall supervised the temporal affairs of the community for the first period of its existence.

Born in Stolpen, Upper Lusatia, Germany, Marshall was the son of Georg Rudolph von Marschall, an army officer, and his wife Louisa Marciana von Loka. Marshall considered his education excellent preparation for his duties as administrator in North Carolina. First tutored at home, he learned money management by taking charge of the family's cash and household accounts a week at a time. He excelled in his academic studies and in oratory, attending universities in Leipzig and Herrnhaag. In 1739, with his father's consent, Frederic Marshall joined the Unity of Brethren (Moravian church) and began to travel to Holland and England in the service of the church.

In England Marshall first dealt with matters relating to North Carolina. He assisted in negotiations with Parliament, culminating in the Act of 1749 which encouraged Moravians to settle in the American colonies. This act granted them freedom of conscience and religion, abstention from military duty, and permission to affirm rather than to swear an oath. In 1753 the Unity of Brethren decided to colonize in North Carolina. In 1761 Marshall was appointed senior civilis, an office conferred on select Moravians excelling in administration, finance, and the ministry. That year Marshall and his family first traveled to America, where he supervised financial affairs in Moravian settlements in Pennsylvania.

In July 1763 the Directorial Conference of the Unity of Brethren in Europe appointed Marshall agent for the Unity in North Carolina and oeconomus of Wachovia, the 100,000-acre tract of land in North Carolina belonging to the Moravians. Delayed from visiting Wachovia by the French and Indian War, Marshall finally arrived late in 1764 to choose the site for a new central town. That first duty in North Carolina accomplished, he began to plan the town of Salem.

Marshall advocated a planned community, believing that an indefinite town plan would be the source of great confusion. The plan for Salem reflected the life that his religious community fostered. The Moravian church had designated Salem to be the trade center of Wachovia. The church supervised both the secular and the spiritual lives of Salem's citizens. Therefore, Marshall conceived a central square as the focus for the vital activities of the community: religious, commercial, and educational. A church, workshops, and schools surrounded the square. Marshall designated narrow but deep lots for single-family dwellings to allow space for a garden and recreation, and to permit residents to attend religious functions regularly. This plan also prevented town sprawl. Marshall's design satisfied not only community requirements but also aesthetic principles; he did not sacrifice appearance for practicality.

Carving a commercial center out of the wilderness was no easy task. Construction began in January 1766, and by 1772 Salem had established itself as a community. Marshall's expertise in town planning produced a functional congregation town and trade center. The quality of Salem's planning was noteworthy in Piedmont North Carolina in the eighteenth century.

Marshall exercised dual roles, both as oeconomus of Salem and as administrator of Unity property in Wachovia. Equipped with naturalization papers from Pennsylvania and a power of attorney from Wachovia's British trustee, he established regulations for the sale and lease of lands in newly reorganized plots. Marshall preferred the leasing of land in order to preserve title to the property for the Unity of Brethren. In this way the Unity could exclude undesirable settlers from the congregation's community. To retain some control over lands sold, Marshall contracted for the Moravians to be granted first refusal to buy property sold within Wachovia. In the early 1770s there was no great demand to buy tracts in Wachovia; however, there was a threat to confiscate parcels of that land.

The Regulators in 1771 charged individual Moravians with unfairly settling on land belonging to others. Marshall, acting as intermediary, heard these charges and referred them to the individuals concerned. The Regulators pursued their claims no further. Because they did not document their charges, Marshall surmised that they were testing the Moravians to see how easily they would give up their lands.

During the American Revolution the Moravians suffered difficulties due to their neutrality, the influx of paper money, and the attempted confiscation of lands by the General Assembly. The Moravians did not renounce Great Britain, fearing such an act would jeopardize fellow Brethren in England and the British West Indies. Too, the British Parliamentary Act of 1749 exempted the Moravians from swearing oaths and military service. Having lived in America, however, they did not want to offend the new government. In 1775 Marshall, who had remained in close communication with the Unity of Brethren in Europe, was called to a General Synod of the Moravian church in Germany. There he remained for four years, detained in Europe by the Revolutionary War. In North Carolina the problems of the Moravians, without benefit of their administrator's guidance, were compounded.

The most serious threat to the Moravians was the Confiscation Act of 1777, allowing state seizure of property belonging to individuals not living in America and not citizens of the state. North Carolinians wanted to seize Wachovia because the trustee of the lands was a British subject living in Great Britain. Marshall received title to the land as its trustee in 1778; he returned to Salem in 1779. For the remainder of the war Marshall professed continual apprehension about the Moravians' property. After the surrender at Yorktown, he approached the General Assembly to request recognition of Wachovia ownership. By April 1783 an act of the Assembly recognized him as trustee for all Moravian lands in North Carolina and as authorized agent for the Unity of Brethren. Marshall had successfully safeguarded the property in Wachovia for the Moravians.

Marshall continued to represent Salem in political and legal matters, traveling frequently to the General Assembly to defend Moravian titles to land. He also supervised the church's business enterprises in Salem, retaining inventory controls, overseeing profits, and compensating for currency fluctuations. He sought pietistic and productive individuals to settle in the community. In the established Wachovia settlements of the late eighteenth century, Marshall continued his commitment to progress by designing several new buildings. As his earlier interest in town planning increased, he drew plans for the community store, the second tavern, the boys' school, and the Bethabara church. He capped his service to the community with a plan for the Home Moravian Church in Salem. Marshall's adaptation of well-designed buildings to the materials and environment of Wachovia left a permanent statement of his ability and his era.

Marshall himself was pleased with what had been accomplished in Wachovia under his guidance. A devout Moravian, he saw God's direction in his life, especially in North Carolina, where, due to isolation, human counsel was slow to arrive. He exhibited superior ability in business. Moravians and non-Moravians alike considered him one of the leading religious figures of his era. On his death in Salem, he was called the father of the community, for through his leadership Salem had become a thriving town on the North Carolina frontier. Frederic William Marshall was buried in God's Acre at Salem on 5 Feb. 1802, thirty-eight years after his arrival as Salem's administrator.

"Forsyth : a county on the march." Adelaide L. Fries, 1949. The Internet Archive: https://archive.org/details/forsythcountyonm00frie