[Gerhard] Henry Mahler, silversmith and founder of a jewelry store in Raleigh, was born in Osnabrück, Kingdom of Prussia. His father was a merchant and his grandfather was a Lutheran minister. Young Mahler emigrated from Germany to the United States in the early 1850s, the move probably prompted by the earlier emigration of his older brothers, Frederick and Christian; two other brothers remained in Germany. Henry stopped briefly in New York before moving to Raleigh, where Frederick was operating a general store "next to Pomeroy's." Frederick was willing to let his younger brother have a silversmith's shop in the store. Henry Mahler—he dropped his first name, Gerhard—had served his apprenticeship as a silversmith and an engraver in Hanover, Germany, so he readily found employment as a craftsman in Raleigh, possibly working at first with John Palmer, an established silversmith. At any rate, by 15 Nov. 1854 Mahler was advertising his trade in the North Carolina Standard. He announced that he made and sold all kinds of jewelry, hollowware, and flatware, placing special emphasis on his skill as an engraver. In 1857 he was operating independently in a small frame building near the African American deaf and dumb asylum.

During the Civil War Mahler supported the Confederacy by making belt buckles, buttons, sword butts, and other necessary metal accoutrements in partnership with A. W. Fraps, Phillip Theim, and other German citizens. After the war he concentrated on his jewelry business in the capital city, building it into one of the largest in eastern North Carolina. In 1876 he built a brick building on Fayetteville Street and bought a residence on the corner of Fayetteville and Cabarrus streets. A large quantity of handsome silver, much of it made and engraved by Mahler himself, has been preserved.

Although Henry Mahler was not especially interested in politics, he was active in civic affairs. One of his first responsibilities was as a commissioner appointed by the state's provisional governor, William Woods Holden. Later he served as an alderman and was instrumental in effecting such city improvements as better street lights and a well-regulated market. In 1872 the Democratic county convention named him as a candidate for the head of the Wake County Board of Commissioners, but he declined to run for office. Records of legislative proceedings and state officers' reports include frequent references to Mahler as the maker of county seals and presses. 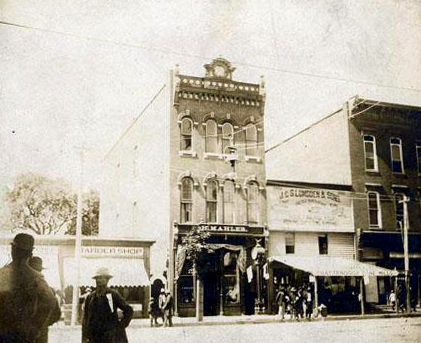 Mahler had the reputation of being an exceptionally well-read man who was particularly knowledgeable about the works of Shakespeare, Goethe, and Schiller. He was also an avid horticulturist and in 1869 planted two large vineyards known as the "Thomasburg" and "Mikelbo," which he enjoyed sharing with fellow townsmen. He was a member of the Lutheran church and belonged to the Hiram Lodge, a Masonic organization.

On 7 Sept. 1866 Mahler married Mrs. Fanny Kramer, a widow with four children. Mrs. Mahler (1834–1914), like her husband, was German-born. Her first husband was Nathan N. Kramer of New York, but after his death the widow moved to Raleigh. The children of Mrs. Mahler by her first husband were Albert, Clara Blake, Samuel, and Henrietta. Henry and Fanny Kramer Mahler had four children: Ludwig August, Frederick Wilbelur, Julius Henry, and Frances. Louis and Frederick eventually became affiliated with their father's jewelry store and on the death of their father changed the name of the firm to H. Mahler's Sons.

Henry Mahler's funeral was held in Christ Church, Raleigh, with the last rites being conducted by the Masons. Interment was in Oakwood Cemetery.