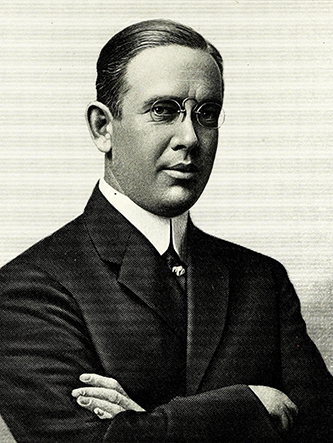 Beginning in 1901, Lyon developed unusual skills in the use of guns which later led to his employment as field representative and demonstrator for the Union Metallic Cartridge, Remington Arms, and Du Pont Powder companies. He once wrote: "I have been more closely identified with the Remington pump gun than with any other shooter on account of my having won two Handicaps with the same in one year (1908), the first year of its manufacture." A special trapshooting cartridge, the George Lyon Load, was named for him.

Lyon's championship status in trapshooting began in 1904, when he won the North Carolina–Virginia combined meet, the first of three such victories, and progressed year by year for four state wins in North Carolina, the Grand American Preliminary in Chicago, the Southern at Birmingham, and the Great Eastern in Boston, all as an amateur. For two years he shot as a professional representing the manufacturers, and in 1911 and again in 1912 he won the cup that was "emblematic of world's championship marksmanship at inanimate objects." During this period as a professional, he was unable to qualify for amateur status for participation on the U.S. Olympic trapshooting team in Stockholm in 1912. However, as coach and adviser for the twenty selected shooters, he led the group to team and individual victories for first place, and with the team he himself performed brilliantly in post-Olympic invitational meets all over Europe.

In 1913, competing as an amateur, Lyon won the Grand American Handicap at Dayton, Ohio, which made him a national champion with a new world's record of ninety-four out of one hundred double targets. The 1914 and 1915 annual championships of the Long Island Sound Clubs brought him national recognition again and the popular title of "Chief Bull Durham," which had previously been given him in the trapshooting social organization, the Okoboji Indian Chiefs.

Lyon's last important shoot was on 11 May 1915 at the Southern Handicap in Memphis, with a high of 147 out of 150 despite his rapidly declining health. He died of tuberculosis eight months later in Albuquerque, N.Mex., where he had gone at Thanksgiving in an effort to recover. At the time of his death he was said by the New York Sun to have belonged to more than seventy-four sports, social, and benevolent organizations; during the last weeks of his life, he was initiated as a Thirty-third degree Mason in Albuquerque in recognition of his service to Masonry over the years. He was a member and stockholder of the New York Athletic Club, which established the thousand-dollar George L. Lyon Memorial Cup annual award in 1916 following his death. In August 1976 he was inducted posthumously into the Trapshooting Hall of Fame at Vandalia, Ohio, at the time of the Seventy-seventh Grand American Tournament.

His wife, also a victim of tuberculosis, had died in 1914 after the birth of their third child; she was Annie Snowden Carr Lyon, the daughter of L. A. and Clara Watts Carr of Durham and a niece of George W. Watts, the Durham philanthropist. Married on 6 Nov. 1900, they were the parents of Clara A. (Mrs. Roland McClamroch), George L., Jr., and Mary Duke (Mrs. Elliott Newcombe).

Lyon, a Presbyterian, was a man of wealth and a stockholder in several Durham businesses at the time of his death; he was survived by his three young children, his brother, Edward Buchanan Lyon, and a sister, Mary Washington Lyon (Mrs. J. E. Stagg). He was buried in Maplewood Cemetery in the mausoleum of his grandfather, Washington Duke, near Lyon's Park, in Durham, a city park named for him and the site of many of his trap shoots.

Stoney McLinn, "The End of the Most Popular Trapshot," American Shooter, 1 Feb. 1916 (portraits).