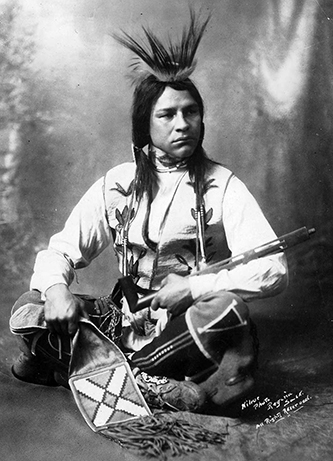 Buffalo Child Long Lance, author and actor, was one of the best-known North American Indians of the late 1920s. In 1928 he vividly described his boyhood among his people, the Blackfoot Indians of the Western Plains, in his autobiography, Long Lance. The book, complete with his memories of the last buffalo hunts and the final intertribal skirmishes, received very favorable reviews and enjoyed considerable commercial success. Immediately after the book appeared, Long Lance was asked to star in The Silent Enemy, a motion picture about the Indians of northern Canada before the arrival of white people. When Paramount released it in 1930, the critics praised Long Lance for his interpretation of the role of Baluk, the Ojibwa brave who successfully guides his starving tribe to a caribou herd. Impressed by the book and the film, the B. F. Goodrich Rubber Company asked Long Lance to design a running shoe for the firm based on his moccasins.

It was at this time—at the height of his fame—that the inexplicable happened. On 20 Mar. 1932 Chief Buffalo Child Long Lance was found dead in a friend's mansion near Los Angeles. The coroner's inquest ruled that his death was a suicide but failed to establish the motive. Only recently has the reason become clear. In reality, Long Lance was not a Blackfoot Indian at all, but rather a black man from Winston-Salem, N. C. His story is that of a person trapped within three cultures—Indian, black, and white, a man so torn that he took his own life.

Nearly half a century after his death, Long Lance's real identity came to light. His name was actually Sylvester Clark Long, and he was raised in a black enclave in West Winston, a predominantly white residential area. His father, Joe Long, worked as the janitor of the white West End School. Born a slave, Joe Long believed, and told his children, that he was half white and half Indian. But he had no legal proof of his ancestry. His wife, Sallie Long, was apparently seven-eights white and one-eighth Croatan Indian. Because Winston authorities classified the family as "colored," Sylvester could not attend the neighboring West End School; instead, he had to enroll at the Depot Street Graded School for Negroes.

From a very early age Sylvester fantasized about the West and about Indians. In 1904 the thirteen-year-old joined a Wild West show. Having inherited high cheekbones and straight black hair from his distant Indian ancestors, he discovered that away from Winston he "passed" as an Indian. While traveling with the show, he began to learn Cherokee from one of the Indian performers. As an "Indian" he could escape being treated as a "colored." On returning to Winston in 1909, he resolved to gain entrance to the famous Carlisle Indian School in Pennsylvania. As luck would have it, his application, stating that his father was half Cherokee and his mother was half Croatan, was not properly checked. After appearing at the school and proving that he could speak some Cherokee, he was admitted.

Carlisle completely changed Long's life. Accepted as a Cherokee following graduation in 1912, he Indianized his name to Sylvester Long Lance. Having achieved an excellent academic and athletic record at the Indian School, he was admitted to Conway Hall, the preparatory school of Dickinson College in Carlisle. After a year's study there, he won a scholarship to St. John's Military School in Manlius, N.Y., where he remained for three years. 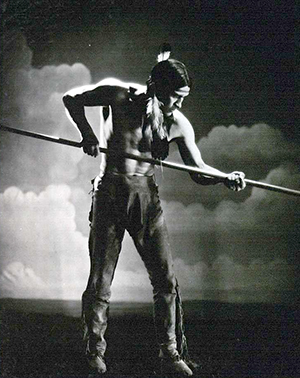 On leaving St. John's in 1916, Sylvester moved north to Canada. The war was on in Europe—the United States had not yet entered the conflict—and he wanted to fight. Enlisting in the Canadian army, he fought in France until severely wounded in the summer of 1917. On his release from the army in 1919, he asked to be discharged in Calgary, Alberta, where he spent the next three years working as a reporter for the Calgary Herald. When anyone in Calgary inquired where he was from, he would say that he was a "Cherokee from Oklahoma," separating himself from his true origins by nearly one thousand miles.

Leaving the Herald in 1922, Long Lance began to write for western Canadian newspapers in Vancouver, Regina, and Winnipeg. By the mid-1920s his articles on the Indians of western Canada also appeared in major American magazines like McClures, Cosmopolitan, and Good Housekeeping. After his adoption in 1922 by the Blood Indians of southern Alberta (members of the Blackfoot Confederacy), he began to use the name they gave him, Buffalo Child, in his byline and to present himself as a Blackfoot.

In 1927 Long Lance moved to New York City and a year later published his "autobiography," in which he brazenly described his "Blackfoot boyhood." Success followed success until early January 1931, when his world began to fall apart. On Monday, the fifth, he met his brother Walter after twenty-two years. The meeting took place because their father, Joe Long, was extremely ill and the family could not pay his hospital bills. Immediately Long Lance began to send money home, but he could not return home himself. Unable to resolve his inner conflict of being a black man masquerading as an Indian in a white man's world, he ended his life. He died as he wished, as Buffalo Child Long Lance, a Blackfoot Indian.

His life is a tragic example of the horrors of racism and of the distortions that it can cause in an individual's life. One is left wondering what this remarkable man might have achieved had he been able to apply all of his creativeness to writing, rather than to "passing" and trying to escape the southern color bar.