William Lord London, merchant, banker and manufacturer, was born in Pittsboro, the son of Henry Adolphus and Sally Lord London. On completing his education in the local schools, he entered his father's mercantile business where he worked until the outbreak of the Civil War.

London enlisted in the Chatham Rifles on 15 Apr. 1861 and remained on active duty until the surrender of General Robert E. Lee. In June 1861 he was promoted to the rank of first lieutenant and a year later was made captain of Company I, Thirty-second Regiment, North Carolina Troops. On 1 July 1862 he was wounded while leading a charge on Malvern Hill. He was wounded again while commanding the sharpshooters of General Junius Daniel's brigade at Gettysburg and received a third injury in the Battle of Winchester. Following the Battle of Gettysburg, Colonel E. C. Brabble of the Thirty-second Regiment reported: "Where all behaved so well it is difficult to discriminate, yet justice requires that I should mention Captain William L. London. To his skill and gallantry is greatly due whatever of service the regiment may have rendered in the battle." In recognition of his services at Gettysburg, London was promoted in July 1863 to inspector general of General Daniel's brigade and a few months later was made adjutant general of the brigade. 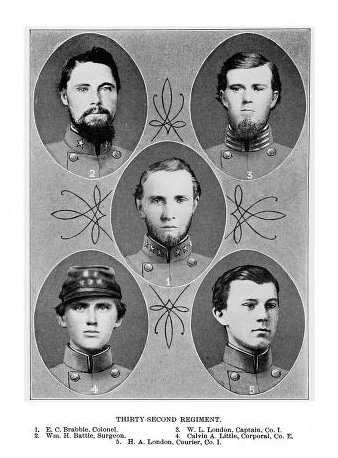 On returning home after the war, London reentered his father's business. In 1901, when he and other citizens of Pittsboro organized the Bank of Pittsboro, he was elected president, an office he held until his death. His business activities were further expanded in 1902, when he became secretary-treasurer of the J. M. Odell Manufacturing Company, whose textile mill was located at Bynum with offices in Pittsboro.

For more than thirty years London served as senior warden of St. Bartholomew's Church. His parish sent him to almost every convention of the Episcopal Diocese of North Carolina from 1875 to 1916, and he was elected a lay deputy from the diocese to the triennial meetings of the denomination's General Convention during 1898–1907 and 1913. London was a trustee of the University of the South in Sewanee, Tenn., from 1892 to 1910 and for several years was a trustee of St. Augustine's College in Raleigh.

Taking an active role in the organization of the United Confederate Veterans in 1895, London was elected brigadier general of the Second Brigade, North Carolina Division. He contributed the chapter, "The Daniel-Grimes Brigade," to Walter Clark's Regiments and Battalions from North Carolina. He died in Pittsboro and was buried in St. Bartholomew's churchyard. On 21 Oct. 1917, in St. Bartholomew's Church, Bishop Joseph B. Cheshire dedicated a stained-glass window in memory of Captain London which was designed by his son, Frank M. London. In his dedicatory address, the bishop said: "I saw in him whom we now remember that faith, patience, goodness, and helpfulness, which St. Paul saw in those whom he commended, and because his life and character, like theirs, was the strength and power of the Church." He stood "fast in the integrity of a high and honorable character."