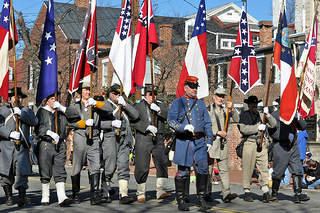 With its international headquarters located at Elm Springs Plantation in Columbia, Tenn., and a significant contingent in North Carolina, the Sons of Confederate Veterans is the oldest organization of male descendants of men who served the Confederacy. Its purposes are historical, benevolent, patriotic, and educational. To become a member of the Sons of Confederate Veterans, one must show lineal or collateral ties to a member of the Confederate army or navy who honorably served, was a prisoner of war, was honorably discharged, or served the Confederacy as a member of Congress. Membership is open to male descendants with a minimum age of 12 years.

As in the beginning, North Carolina's modern Sons of Confederate Veterans are involved in a multitude of civic projects. The erection of monuments and preservation of battlefields throughout the state remain favored projects. The restoration and maintenance of cemeteries and graveyards is also of high priority. The group gives scholarships, research grants, and gifts of books to libraries and raises funds for the publication of archival records and the support of state and regional archives. Gen. Robert E. Lee's birthday, Confederate Flag Day, and Confederate Memorial Day are some of the annual events publicly celebrated by the Sons of Confederate Veterans at county courthouses and the North Carolina State Capitol. In 2005 the organization had approximately 3,500 active members in North Carolina.

Where can I research and

Where can I research and quantify the number of black, bi-racial sons of confederate (slave owning ) soldiers? I know it’s much harder than tracing white sons because confederate slave owners generally disavowed their black children, but wondering if your organization can provide resources to collect that data? Thank you.

I am forwarding your question to our reference librarians and they should be able to assist you.

My bfs ancestors fought in

My bfs ancestors fought in the Revolutionary War,how can he become a Sons of the Confederate?