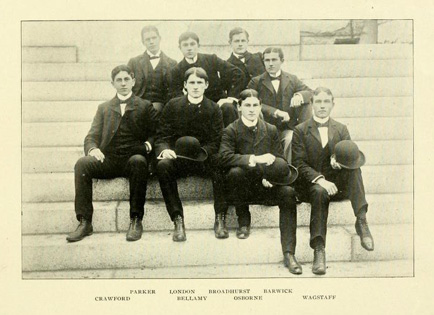 Henry Mauger London, state legislative reference librarian, was born in Pittsboro, the oldest son and second of eight children of Henry Armand and Bettie Louise Jackson London. Both of his parents were from old and influential families in the town, but the Londons had lived in Wilmington before moving to Pittsboro around 1836.

London received his early education at Pittsboro Academy. In 1896 he entered The University of North Carolina, the alma mater of his father and both of his grandfathers. At Chapel Hill he was an active member of the Dialectic Literary Society and editor of the student newspaper, The Tar Heel. Graduated with honors in 1899, London worked as a clerk in the U. S. census office, in Washington, D. C., from 1900 until 1902 and at the same time began a law course at George Washington University, then known as Columbian University. In the fall of 1902 he returned to Chapel Hill, completed his study of law, and was admitted to the North Carolina bar in 1903.

For the next ten years, London resided in Pittsboro and practiced law with his father while also assisting in the editing of the Chatham Record. He served as mayor of Pittsboro from 1903 to 1905 and represented Chatham County in the lower house of the General Assembly in 1907–8 and in the state senate in 1911. In 1913 he was a Democratic presidential elector.

In 1913 London moved to Raleigh to become chief deputy collector of internal revenue for the state of North Carolina, a post he retained until 1919, when he became legislative reference librarian. In this position he directed the drafting of bills to be introduced in the General Assembly, and in the following twenty years he assisted in the drafting of around five thousand bills. Biennially from 1931 until 1939, it was also his responsibility as librarian to edit the North Carolina Manual.

In 1918, at the death of his father, London assumed the editorship of the Chatham Record but sold the newspaper after two years. In other aspects of his life, however, he continued to reflect his father's concerns—state and local history, Democratic-conservative politics, the Episcopal church, The University of North Carolina, and a variety of Confederate memorial associations. His brother, Isaac, continued the family's newspaper interests by establishing and for many years editing the Rockingham Post-Dispatch.

On 25 Nov. 1908 he married Mary (Mamie) Elliot, the daughter of George and Nelia McNeill Elliot of Cumberland and Harnett counties. They had two children: Henry Mauger, Jr., and George Elliot. London died in Raleigh and was buried at St. Bartholomew's Church, Pittsboro.

Minutes of the Board of Trustees of the University of North Carolina, 1916–32 (University Archives, Chapel Hill).