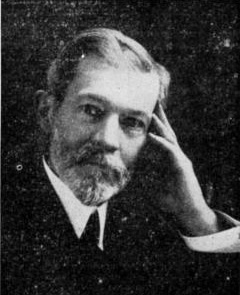 Henry Armand London, journalist and lawyer, was born in Pittsboro, the son of Henry Adolphus and Sally Lord London. He attended the Pittsboro Academy before entering the sophomore class at The University of North Carolina in July 1862. London kept an interesting diary of his student days at Chapel Hill during two years of war. It was popular in its day and widely read for many years afterwards. He left the university in the first session of his senior year to join the Confederate army in November 1864. Serving as a courier in Company I of the Thirty-second North Carolina Regiment, he participated in one of the last actions of the Civil War in carrying the message to General William R. Cox to cease firing because General Robert E. Lee had just surrendered. On the return of peace, President David L. Swain of the university offered to grant a B. A. diploma to all the members of the class of 1865 who had gone to war, if they returned to the campus and gave an oration. London was one of the three young veterans to do so, speaking on "The Crusades." 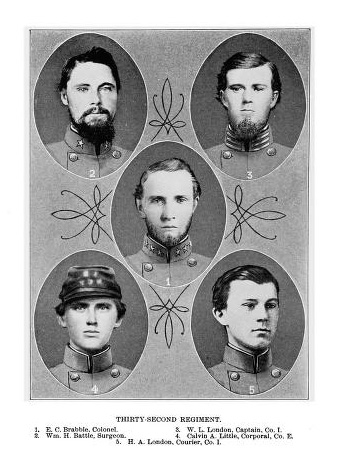 Following graduation London returned to Pittsboro to read law under Dr. John Manning, receiving his license to practice in January 1867. He was a lifelong Democrat and served for forty years as a member of the Democratic state executive committee. From 1870 to 1872 he was reading clerk of the North Carolina Senate, and in the campaign of 1872 he was a presidential elector for the Fourth Congressional District. London represented Chatham County in the state senate in 1901 and 1903, serving in the latter year as president pro tem. During his first term, he successfully introduced the London Libel Law. This law, one of the first of its kind enacted by any state legislature, was effective in maintaining a free press in North Carolina. The law remains on the statute books but was amended in 1943 to include radio and television stations.

Active in local affairs in Pittsboro, London founded in 1878 a successful weekly newspaper, the Chatham Record, which he edited and published until his death. From 1883 to 1884 he served as president of the North Carolina Press Association and for several years was a member of the executive committee of the National Editors Association. At a convention of newspaper editors held in Buffalo, N. Y., in 1901, London made a speech on the reconciliation of Civil War differences that was enthusiastically received. As a businessman, he was a director of the Bank of Pittsboro, director of the Commercial National Bank of Raleigh, and for a short time president of the Pittsboro Railroad Company, which built in 1886 the railroad linking Pittsboro to a main line of the Seaboard at Moncure. A member of St. Bartholomew's Church, London served the parish as vestryman, treasurer, lay reader, and delegate to diocesan conventions. He also was adjutant general and chief of staff in 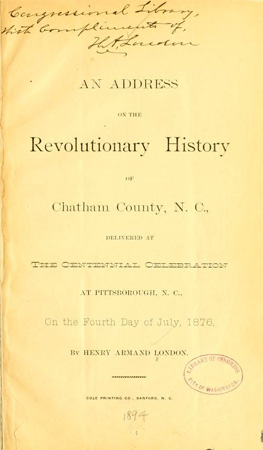 the North Carolina division of the United Confederate Veterans.

Interested in history, London delivered an address on the Revolutionary history of Chatham County at the centennial celebration in Pittsboro on 4 July 1876. He was the author of a memorial on the life and services of General Bryan Grimes, published in 1886; "The Last at Appomattox," appearing in Literary and Historical Activities in North Carolina, 1900–1905 ; and the "Thirty-Second Regiment," published in Walter Clark, ed., Histories of the Several Regiments and Battalions from North Carolina. In 1916 he was president of the State Literary and Historical Association. An enthusiastic alumnus of The University of North Carolina, London served as a trustee from 1901 to 1917. In 1911 the university awarded him an honorary M. A. degree.

In 1875 London married Bettie Louise Jackson (1853–1930), the daughter of Joseph John and Lucy Worth Jackson, daughter of Governor Jonathan Worth. The Londons had eight children: Henry Mauger, Lucy Worth (Mrs. John H. Anderson), Sallie Lord (Mrs. Henry Fell), Captain John Jackson, Bettie Jackson (Mrs. James H. Cordon), Worth, Isaac Spencer, and Camelia Rutherford (Mrs. Fred Jerome). Henry Armand London was buried in the churchyard of St. Bartholomew's, Pittsboro. Judge Walter Clark, a classmate at Chapel Hill, observed that he was "as gallant a soldier as ever wore the gray, and since the war, a leading lawyer and editor and one of the most prominent men in the state."