James Lindley, Loyalist militia leader, was born in London Grove, Chester County, Pa., the son of Thomas (1706–81) and Ruth Hadley Lindley (1712–85). Of English origin, the Lindleys by the seventeenth century were in Ireland where they became members of the Society of Friends. James Lindley's grandfather, for whom he was named, emigrated from County Carlow in 1713, settled in Chester County, Pa., and was a founder of New Garden Monthly Meeting. Thomas Lindley moved his family to Orange County, N.C., acquiring grants on Cane Creek totaling 950 acres by 1759. He was received into Cane Creek Monthly Meeting on 6 Oct. 1753. On 10 Aug. 1755 he formed a partnership with Hugh Laughlin to construct Lindley's Mill, the first gristmill in the valley. This mill was the site of an important battle of the Revolution on 13 Sept. 1781, when a Whig militia force, seeking to release the captured Governor Thomas Burke, was defeated by Colonel David Fanning. As early as 1773 Thomas Lindley and neighboring Friends began a meeting for worship that became Spring Monthly Meeting in 1793. 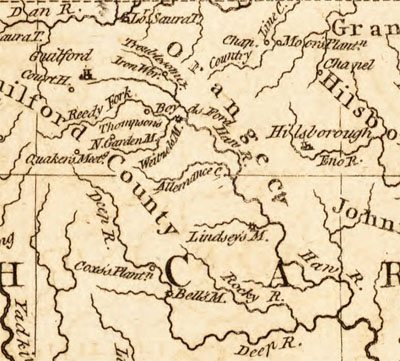 James Lindley in 1754 married Mary Cox, the daughter of William Cox of Cox's Mill in present Randolph County. By 1761 Lindley had acquired 1,170 acres in Granville grants on Terrell Creek in Orange (now Chatham) County. The county court minutes of 1753–66 show that he was licensed to keep an ordinary in his home.

Early in 1768 James and Mary Lindley moved to South Carolina, settling on Reaburn's Creek near the junction of the Saluda and Reedy rivers in the Ninety-Six District. He acquired 200 acres that year and another 200 acres in 1773. On 2 Dec. 1768 he was commissioned a Crown justice of the peace for Granville County, and until the Revolution he held Crown commissions for Craven County, Ninety-Six District, and Cheraw District. The South Carolina General Assembly appointed him a justice for Ninety-Six District in 1776. Considering his Loyalist sympathies, it is unlikely that he served the Revolutionary government.

Lindley was a captain in the Upper Saluda Regiment of the provincial militia. In 1775 a majority of the South Carolina up-country settlers were loyal to the Crown and had to be forcibly subdued by the Revolutionary forces under Charles Town leadership. In mid-July 1775 the regiment was mustered by the commanding officer, Colonel Thomas Fletchall of Fair Forest, for the purpose of determining the loyalty of the militia. The regiment unanimously supported the Crown. At this time, David Fanning, who later became a noted Loyalist partisan commander, was a sergeant in Captain Lindley's company.

In November 1775 civil strife began between the Whigs and the Loyalists, and the Upper Saluda Regiment, now commanded by Major Joseph Robinson, successfully besieged a Whig force at Ninety-Six (19–21 November). With aid from the North Carolina Whig militia, a combined force in the "Snow Campaign" cornered the heavily outnumbered Loyalists under Patrick Cunningham at the Great Cane Brake on 22 December. Lindley was among 130 Loyalist prisoners captured at this skirmish and sent to Charles Town where, in an effort at reconciliation, they were soon released.

By the summer of 1776 the British were encouraging the Cherokee to raid the frontier. On 15 July 1776 a Loyalist-Cherokee party attacked Lindley's Fort on Reaburn's Creek, presumably the home of James Lindley, but it is not known whether he participated in this battle. After two and one-half hours of inconclusive skirmishing, the Loyalists and Indians withdrew. Lindley remained an active Loyalist and probably resided at Reaburn's Creek or was occasionally "out lying" in the forest until 1779. Governor John Rutledge in a letter once referred to Lindley's participation in a raid, noting that he escaped capture.

Early in 1779 South Carolina Loyalists mustered under a Colonel Boyd and marched into the Georgia backcountry to cooperate with the British invasion. At Kettle Creek in Wilkes County on 14 Feb. 1779, the Loyalists were surprised and defeated by Whigs commanded by Colonels Andrew Pickens, John Dooley, and Elijah Clarke. Among the Loyalist prisoners taken to the Ninety-Six jail was James Lindley. He and four other Loyalist leaders were tried, convicted, and hanged for treason at Ninety-Six in late April 1779. His widow and their children returned to North Carolina, and in 1790 Mary Lindley was living in Orange County. The Lindleys had at least three sons: Jonathan, William, and Thomas.

William Lindley had moved back to North Carolina and settled in Chatham County by 1774. He was recruited with his father by Colonel Boyd in 1779 and was captured in the Battle of Kettle Creek. Although imprisoned at Ninety-Six and tried for treason, he was released shortly before the execution of his father. He returned to North Carolina and on 16 July 1781 Colonel David Fanning commissioned him a captain in the Chatham County Loyalist militia. In August he commanded a raid through Orange County, and in September he was in the Hillsborough raid and the Battle of Lindley's Mill. He became one of Fanning's most trusted officers. After the British evacuation of Wilmington and the overpowering of the Loyalists, William Lindley moved over the mountains to the Watauga settlement. He was murdered there by three Loyalist deserters in January 1782. Fanning reported that Lindley was "cut to pieces with their Swords," and Fanning personally avenged his death by tracking down and hanging two of the three assassins.