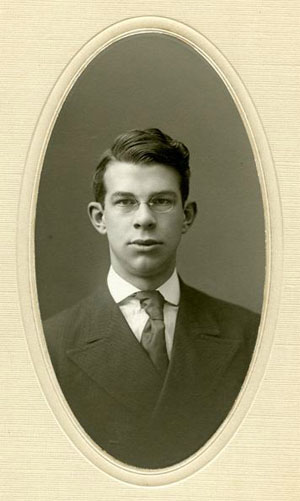 Sturgis Elleno Leavitt, teacher and scholar, was born in Newhall, Maine, the son of William Hooper and Mary Ellen Sturgis Leavitt, descendants of distinguished New England families whose ancestors arrived on the Mayflower in 1620. Sturgis Leavitt received his first schooling from his mother, followed by instruction in the public school of Gorham, Maine, where he studied Latin and Greek (1900–1904). At age sixteen he entered Bowdoin College and received a bachelor of arts degree in 1908. He remained an active alumnus of that institution throughout his life, serving in many capacities.

Leavitt began his career as a teacher of French in secondary schools, first in the Jackson Military Academy, Mo. (1908–9), then in Cushing Academy, Ashburnham, Mass. (1909–12). Convinced that he would be of greater service to more mature students, he entered the graduate school of Harvard University and was awarded a master of arts degree in 1913. The following year he joined the faculty of Northwestern University, then returned to Harvard where he received a doctorate in Romance languages in 1917. That fall he accepted a position as assistant professor of Spanish at The University of North Carolina, thus embarking on a long career of interpreting the literatures of Spain and Spanish America until his retirement in 1960. Even then he continued his research and worked in his office almost every day until a week before his death.

At the university, Leavitt rose to the rank of professor and in 1945 was named Kenan Professor. Over the years he served on almost every standing committee, many special committees, the board of governors of The University of North Carolina Press, the Fulbright Committee, and the Faculty Council. Two of his most valuable contributions were as director of the Institute of Latin American Studies (1941–58), which he founded, and as Adviser to Foreign Students. He was indeed friend, guide, and confessor to many foreigners in a strange land. In January 1941, 110 scholars from South American countries, sponsored by the U.S. Department of State, went to Chapel Hill for three months. These professors, physicians, lawyers, editors, and students were given permission to visit any department, school, or class in the university; they were also provided a fine course in basic English by I. A. Richards.

For more than half a century Sturgis Leavitt was associated with many linguistic, literary, historical, and professional organizations in the United States. He was a member of the American Association of Teachers of Spanish and Portuguese for fifty-seven years, serving two terms as president (1945–46) and publishing a history of the society in its journal, Hispania (vol. 50, 1967). From the day of its founding in 1928, Leavitt was an enthusiastic member of the South Atlantic Modern Language Association, served two terms as its president (1935–37), and was editor of its journal, the South Atlantic Bulletin, from 1935 to 1951. He was a representative of the Modern Language Association to the American Council of Learned Societies (1942–50), president of the Southern Humanities Council (1947–51), and associate editor of the Revista Iberoamericana (1936–51) and of the Hispanic Review (1937–69). In 1938 he represented the United States at the founding of the Instituto Internacional de Literatura Iberoamericana in Mexico and at the centennials of the births of José Toribio Medina in Santiago, Chile (1952), and José Martí in Havana (1953). Leavitt was a member of the Real Academia de C´diz (1924), Hispanic Society of America (1937–68), Academia Mexicana (1974), Academia Nacional de la República de Colombia, Sociedad Chilena de Historia y Geografía, Fundación Nacional de Eloy Alfaro (Panama, 1953), and Order of the Golden Fleece of The University of North Carolina. He received honorary degrees from his alma mater, Bowdoin College (1943), Davidson College (1941), and The University of North Carolina (1965).

On receiving a doctorate in 1917, Leavitt was awarded a Sheldon Fellowship by Harvard University for study in Spain. World War I made such a project impossible, but in 1919 the fellowship was renewed and he and his wife set out for South America where they spent sixteen months visiting libraries and scholars in Argentina, Bolivia, Chile, Colombia, Peru, and Uruguay—the first of many journeys south of the border and to Europe. This trip saw the birth of one of Leavitt's main scholarly interests, Latin American literature. His second powerful interest was in the field of Spanish drama, especially the comedia of the Siglo de Oro. As one of the rewards of his investigation in this field, the city council of Zalamea de la Serena, in southern Spain, named him Honorary Perpetual Mayor (1965)—reflecting his enthusiasm for Pedro Calderon's play, El alcalde de Zalamea. In these two fields Leavitt produced innumerable articles, books, and reviews, as well as a dozen texts for American students studying Spanish.

In addition to his academic interests, Leavitt was an ardent, though not expert, golfer (for a time he served as president of the Chapel Hill Country Club) and a staunch Republican. A diligent member of the Mayflower Society, he was governor of the North Carolina chapter (1960–69) and editor of its Newsletter, in which he published a history of the North Carolina branch.

Leavitt could not have accomplished all this alone. On 29 June 1916, he married Alga Webber who came to be his guide, philosopher, confessor, secretary, and chauffeur. She also played a leading role in the social and professional life of Chapel Hill. She was active in the Carolina Playmakers, president of the Women's Club (1921–23), a vice-president of the North Carolina Society for the Eradication of Tuberculosis, and the first woman to serve on the board of directors of the Orange Savings and Loan Association. Alga Leavitt died on 22 Oct. 1964.