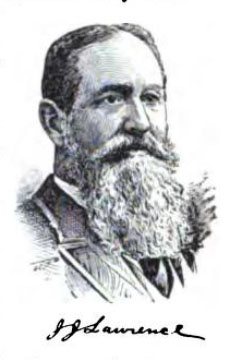 Joseph Joshua Lawrence, chemist, physician, editor, publisher, and philanthropist, was the son of Bennett Barrow and Martha Ann Frances Knight Lawrence and the grandson of Elder Joshua Lawrence. In 1838 his parents settled a short distance north of present-day Rocky Mount on a 359-acre plantation recently purchased by his paternal grandfather. His father appears to have been an impractical planter and businessman; he was rescued from financial catastrophe in the early 1850s by his wealthy father-in-law, Jesse C. Knight, who established a lifetime estate that would pass intact to his Lawrence grandchildren.

Lawrence was educated in a local private school but the dates and places of his "university and medical education" are unknown. The A.M. degree apparently was bestowed as an honor by Bethany College in western Virginia. He opened his first medical office in Wilson in March 1858. By January 1861 he had moved to Goldsboro to edit The Daily Rough Notes, which he and his brother-in-law, Richard H. Blount, had recently purchased. In August he enlisted in Company F, Fortieth North Carolina Regiment, and was soon elected captain, but bad health forced his resignation at the end of November. Returning to Wilson, he described himself as an editor when he reenlisted in April 1862; a month later, as a captain, he was in charge of a company of volunteers, the Wilson Partisan Rangers, sometimes denoted as a part of the Sixteenth Battalion of North Carolina Cavalry and sometimes as a part of the Seventh Cavalry. Resigning his commission in October, he returned to Wilson and may have been associated with the Wilson Confederate hospital. At some date before 28 Mar. 1863, he established a drug store. He served as county coroner in 1864 and 1865 and in 1866 resumed the practice of medicine.

The first major step destined to lead Lawrence in a new direction resulted from his preparation of "Lawrence's Compound Extract of Rosadalis," which appeared on the market by the end of August 1867. It was soon followed by "Dr. Lawrence's Celebrated Woman's Friend," then by "Koskoo" in 1869 and "Listerine" in 1879. Moving to Baltimore early in 1868, he established the Dr. Joseph J. Lawrence Chemical Laboratory at 244 West Baltimore Street prior to selling his Rosadalis trademark. In 1869 Lawrence was established in Norfolk, Va., as an "organic chemist" and was manufacturing his other nostrums, but success in this field eluded him and in 1870 he returned to Wilson. While practicing medicine and operating a drug store, he also began publication of The Medical Brief in July 1873. This monthly journal became extremely popular, attracted widespread advertising, and reputedly had "the largest circulation and is financially the most prosperous medical publication in the World."

Lawrence's financial record, nevertheless, was unstable. On 1 Jan. 1868 he borrowed $5,000 and signed a royalty contract with his wife's brother, Marcellus J. Edwards, followed by a promissory note on 28 September for half of the $35,000 realized from the sale of the Rosadalis formula. On 2 June 1869 Lawrence was declared a bankrupt in Virginia, having paid Edwards only $1,000. His second bankruptcy was adjudicated in North Carolina in April 1878. Edwards later settled in Raleigh and in October 1896 renewed his unsatisfied claims in the Wake County Superior Court. Although Lawrence's lawyers had the suit transferred to the U.S. Circuit Court, Edwards finally collected $7,500 in October 1897.

Lawrence left Wilson and moved to St. Louis, Mo., in 1875. There he seems to have become a partner in the firm of Battle and Company Chemists' Corporation, founded in St. Louis in 1882 by Jesse Mercer Battle with whom Lawrence had been associated while both resided in Wilson. As one of "the most able journalists in the city," Lawrence was "conspicuous in his efforts on behalf of almost every public work" and "generous [with] contributions of time and money." He prospered in everything he touched, including the successful efforts that resulted in the 1904 Louisiana Purchase Exposition in St. Louis.

After building a three-story, sixteen-room granite block residence and investing in other real estate in St. Louis, Lawrence also purchased a fine mansion on Fifth Avenue in New York City. He died in New York and was buried in the family mausoleum at the Bellefontaine Cemetery, St. Louis. He left an estate estimated at between $7 million and $11 million. Lawrence had married Josephine Edwards of Greene County, N.C. Their children, Frank and Minnie, both predeceased him, and in due course his only grandchild, Vera Siegrist, inherited the fortune.