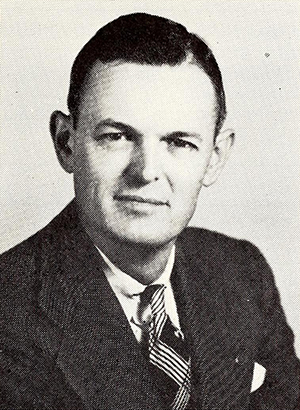 Henry Eli Kendall, Jr., engineer and state government official, was born in Shelby of English and Scottish ancestry, the son of Henry E., Sr., a pharmacist, and Mary Whitelaw Wiseman Kendall, of Danville, Va. He was a brother of Henry Wiseman Kendall, editor of the Greensboro Daily News. As a youth Kendall worked in his father's drugstore, and he was graduated from Shelby High School in 1922 as valedictorian. At North Carolina State College, from which he received the B.S. degree in 1926, he was president of the student body.

After employment by the Plumer Wiseman Engineering Co. of Danville, Va., Kendall went to Shanghai, China, in 1930, where for six years he was office manager of Dibrell Brothers Tobacco Co. Returning to North Carolina in 1936, he settled in Raleigh and became chief of plant operations of the State School Commission (which was given the duties of the State Board of Equalization on its creation in 1933).

Kendall entered the U.S. Army Corps of Engineers as a first lieutenant in 1942, serving in Europe, the Philippines, and Japan until his discharge in 1946 as a lieutenant colonel. In July 1946 Governor R. Gregg Cherry named him chairman of the Unemployment Compensation Commission, and the next year he supervised the return of the U.S. Employment Service to the state of North Carolina and the reorganization of his agency to the Employment Security Commission. Reappointed by the six succeeding governors, Kendall served as chairman for twenty-seven years until his retirement in 1973. His duties included collecting taxes and paying claims to the unemployed, as well as supervising sixty local offices in North Carolina. Working under a federal-state cooperative program, Kendall was noted for his conservative approach and for implementing the Work Incentive and Comprehensive Employment Training Acts in the state.

Serving twice as president of the national Interstate Conference of Employment Security Agencies, Kendall was on the executive committee of the President's Committee on Employment of the Handicapped, a member of the coordinating committees on Aging and the Status of Women, chairman of the Governor's Advisory Committee on Implementing the Manpower Development and Training Act, and on the board of directors of the Manpower Development Corporation for eight years. For ten years he also was a director of the State Employees Credit Union.

On 21 June 1947 he married Katharine Kerr of Yanceyville. A Presbyterian, he served as deacon, elder, and treasurer of White Memorial Church in Raleigh. Kendall was buried in the Presbyterian church cemetery, Yanceyville.

Lee B. Weathers, The Living Past of Cleveland County (1956).