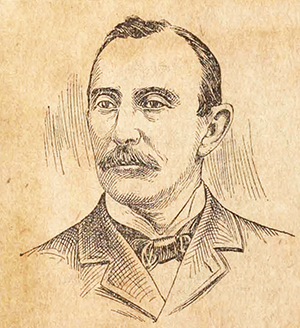 After attending school in Rutherford County, young Justice entered the Rutherfordton Academy at age ten. Five years later he transferred to Golden Grove Seminary near Spindale for several more years of study. On 14 July 1862, at age eighteen, he enlisted in Company F, Sixty-second North Carolina Regiment, of the Confederate Army; later he was promoted to ordnance sergeant. At the end of the war he began studying law under Judge John B. Bailey in Asheville and was licensed in January 1868. Establishing an office in Rutherfordton, he practiced law until appointed judge.

After the war Justice was elected mayor of Rutherfordton. In 1876 he became the first Democrat since the end of the Civil War to serve as senator for the Thirty-ninth District, made up of Rutherford and Polk counties. In 1884 he became the Democratic presidential elector for his district. Later he was a state senator in the legislative sessions of 1897, 1899, and 1901, serving as chairman of the Judiciary Committee in 1899 and 1901. In a speech to the 1900 Democratic convention, Justice presented Charles B. Aycock as a gubernatorial candidate. In 1901 Governor Aycock appointed him a Superior Court judge for the Sixteenth Judicial District. While Governor Locke Craig was in office, Justice served as chairman of a commission to establish controversial regulations for railroad freight. During the state Democratic convention of 1904 held in Greensboro, he was nominated for the Supreme Court by W. T. Crawford but lost the election to Judge Hoke.

On 21 Mar. 1865 Justice married Margaret ("Maggie") L. Smith, the daughter of James M. and Martha Smith of Buncombe County; they had six children: Edwin J., Charles, Butler Alexander, Martha McCree, Gaston Bailey, and Michael Hoke, Jr. In 1895 he married Lula B. Tanner, the daughter of Andrew and Amy Carolina Tanner of Saluda, and they had a daughter, Louisa. Justice died on the day before his seventy-fifth birthday and was buried in the Rutherfordton Cemetery. Two oil portraits of him are in the possession of his descendants.

John R. Logan, Sketches, Historical and Biographical, of the Broad River and King's Mountain Baptist Association, from 1800 to 1882 (1887).

M. G. McGuinn to the author.