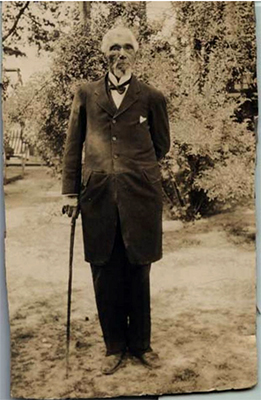 James Henry Jones, coachman and confidential courier for Confederate President Jefferson Davis and later a highly respected black public official in Wake County, was the free-born son of James H. and Nancy Jones of Wake County. There was some speculation that he was part Indian. The elder Jones died during his son's infancy, and young James learned the trade of brick mason and plasterer. His general education was derived from his life's experiences. During the winter months of the 1850s, he hired himself out as a gentleman's servant and waiter.

In the early summer of 1862, when the Peninsular campaign threatened Richmond for a brief time, Mrs. Varina Howell Davis and her children resided on the campus of Saint Mary's School in Raleigh. Jones was probably recommended to them as a servant and coachman by his former winter employer, Watt Otey, a brother of James Hervey Otey, Episcopal Bishop of Tennessee. Jones was hired and accompanied the Davis family to the Confederate "White House" in Richmond in the fall of 1862.

For the rest of the war, Jones was the body servant, coachman, and confidential courier for President Davis. In April 1865 he drove the Davis family south from Richmond, through the Carolinas, and witnessed his employer's arrest near Irwinsville, Ga. Thereafter Jones passionately refuted the Northern allegation that President Davis was "dressed in female attire" when captured. He accompanied Davis to Fortress Monroe, Va., and in mid-1865 returned to his former home in Raleigh.

During the fall of 1865, Jones began a distinguished career of public service when elected a delegate to the first freedmen's convention (State Convention of Colored Men), in Raleigh, which organized the Frederick Douglass Equal Rights League (later renamed the North Carolina State Equal Rights League). He was reelected a delegate to the second freedmen's convention (Colored State Educational Convention) in 1866. After this convention, Jones was appointed Grand Deputy of the state chapter of the Union League of America and served as a Union League organizer in North Carolina.

During the North Carolina Constitutional Convention of 1868, Jones was elected head doorkeeper and also canvassed for the document's adoption. Late that year he was named deputy sheriff of Wake County, a post he held until 1876 or 1877. In 1869 he assisted in the organization of Raleigh's Victor Hose Company, the city's first fire-fighting organization. The hose company was chartered by the state legislature in 1872, and Jones was elected its first foreman, serving until 1882. He also was elected president of the Colored Firemen of Raleigh.

In the 1870s, Jones was twice nominated by Wake County Republicans for a seat in the General Assembly but declined to run on both occasions. Elected city alderman for the Western Ward of Raleigh in 1873, he served for eighteen years with one or two intermissions. In 1876, he was instrumental in organizing the first black military company in North Carolina.

During the 1880s, Jones was engaged as a contractor for waterworks, street railways, and street grading in several southern towns. His last contract was with the Rock Bridge Company of Glasgow, Va., of which former Virginia Governor Fitzhugh Lee was president. Jones also served as a deacon of Raleigh's Congregational Church.

In 1893, while living in Alabama, Jones learned that the remains of Jefferson Davis were being moved to Hollywood Cemetery in Richmond, Va. Having maintained contact with the Davis family after the war, he was asked to drive the elaborate funeral car during a memorial service held at the Capitol in Raleigh on 30 May 1893.

Jones was a supporter of General William Ruffin Cox, a Democrat and opponent of Reconstruction who was elected Secretary of the U.S. Senate in 1893. Cox hired Jones for a post in the Senate Stationery Room, where Jones served until his death.

In 1906, Jones attended a ceremony in Richmond to lay the cornerstone for the Davis Monument and met with Mrs. Davis for the last time. Shortly before her death she sent him her husband's favorite buck horn handled walking cane. Jones later donated the cane and other Davis artifacts to the North Carolina Museum of History.

Jones died in Washington, D.C. on April 8, 1921, and was buried there in Woodlawn Cemetery. He was survived by his wife Joanna Jones and their son Dr. Willis W. Jones. He was preceded in death by his son, attorney James T. Jones, the year prior.

"Minutes of the Freedmen's Convention, Held in the City of Raleigh, on the 2nd, 3rd, 4th and 5th of October, 1866: Electronic Edition. Freedmen's Convention (1866: Raleigh, N.C.)." Documenting the American South, University of North Carolina at Chapel Hill. https://docsouth.unc.edu/nc/freedmen/freedmen.html (accessed May 16, 2022).

Hello,
I work for the American Civil War Museum in Richmond Virginia. We operate the White House of the Confederacy were Jones worked. I am curious about the last line of your article. Joanna is not listed in the 1920 census, so I assumed that she died before James. Can you tell me what you know about her death? Additionally, I have no information on James T. Jones and was unaware that there was a second son. Any information on him would be greatly appreciated.
Thank you

Thank you for using NCpedia and for your comment!

The biography here is a bit

Thanks for ALL of the great

Thanks for ALL of the great updates. I was constrained by available data when the article was written and I only learned of Jones' actual burial site after my submission for publication in DNCB. Thanks to all contributors for their diligence and corrections. The Author....

Thank you for visiting NCpedia and leaving such a wonderful comment.

Small point, but James Otey was Episcopal Bishop of Tennessee, not Virginia.

Just found a Jan. 9 1915 article in The Pinehurst Outlook paper on page 8 entitled "James H Jones of Raleigh. Mentions Jones staying with body servant in Raleigh who might be Turner Evans according to federal census.

Just located a July 10 1910 article in the Asheville Gazette News entitled "James H Jones,Negro,Interesting Character" on page 2. Discusses Jones burial of the Confederate Great Seal and items given to N C Hall of History which included tent and candlesticks used when Jones and President Davis captured 5-10-1865.

I have now located the burial

I have now located the burial site of James Henry Jones only granddaughter,Elsie Cabell Jones Hamilton. Elsie died on 10-27-2008 in Howard County Maryland and is buried in Fort Lincoln Cemetery without a gravemarker in Brentwood Martland. Have written article about James and Elsie.

On 12-19-17 located the exact date of death of the only known granddaughter of James Henry Jones- Elsie Cabell Jones Hamilton. Elsie passed on 10-17-2008 in Howard County Md. Still researching her place of burial.Her husband and parents preceded her in death. A caretaker was her support person at death as her actual home was 409 58th st N.E. in D.C.