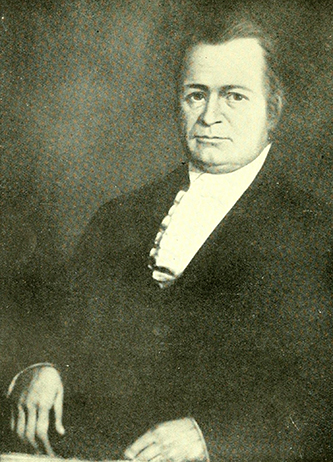 Calvin Jones, physician, politician, and newspaper publisher, was born near Sheffield, Mass. His father, Ebenezer Jones, was of Welsh ancestry, a descendant of Thomas Ap Jones, who arrived in Massachusetts in 1651. His mother was a descendant of William Blackmore, who came from England in 1665. Both parents were interested in their children's education, and Calvin apparently studied in the local schools and certainly read widely, but there is no evidence that he attended a college or university. It is likely that he apprenticed himself at about age fourteen to a local physician practicing in the Berkshires, and it is certain that in 1792, when he was seventeen, he received a certificate from the United Medical Society (now the Litchfield County Medical Association of Connecticut) which entitled him to practice medicine.

For some time Jones practiced in Freehold, N.Y., and there published A Treatise on the Scarlet Fever, or Canker-Rash; its preface was dated 10 Dec. 1793. In 1795 he moved to Smithfield, N.C., where he practiced for about eight years. In 1799 he was one of the small group of physicians who organized the first North Carolina Medical Society, serving as corresponding secretary during its five years of existence. Jones was also influential in the introduction of vaccination for smallpox in the state. The Raleigh Register for 11 Mar. 1800 contained a notice that he would inoculate against smallpox in April, but this was postponed to the following year. In 1801 he published in the Register a long letter on Jenner's vaccination for smallpox, which he urged physicians and the public to accept instead of the inoculation procedure. In 1799 and 1802, he was a member of the North Carolina House of Commons from Johnston County.

About 1803 Jones moved to Raleigh and became involved in various activities in addition to medicine. In 1807 he was elected to the House of Commons from Wake County. In association with Thomas Henderson he edited and published the Raleigh Star for several years, served as mayor (then called intendent of police) of Raleigh, and was active in the Masonic Order. In 1817 and 1819 he was Grand Master of Masons in North Carolina. Jones also served as adjutant general of the state militia for five years, including the period of the War of 1812. He invested in land, both in North Carolina and in Tennessee.

Jones continued his medical practice, read widely in scientific journals, published several articles between 1808 and 1819, and, while living in Wake Forest, taught several medical students. He was particularly interested in ophthalmology and became well known for his skill in removing cataracts. In addition to his interest in medical education, Jones served as a trustee of the Raleigh Academy and from 1802 to 1832 as a trustee of The University of North Carolina, to which he donated books for its library and his collection of "artificial and natural curiosities." In 1832 he sold Wake Forest, his 615-acre plantation near Raleigh, to the Baptist State Convention, and it became the site of Wake Forest College. At this time he moved to Bolivar, in West Tennessee, where he owned much land, and built a home, Pontine. The state of Tennessee bought his estate, where it built the Western Hospital for the Insane.

At one time there were three copies of Jones's portrait, the original of which hung in his home at Bolivar and later was taken by one of his descendants to Dallas, Tex. The copies were located at Wake Forest and in the Adjutant General's Office and the Grand Lodge Hall (Masonic) in Raleigh. The one at Wake Forest was later destroyed by fire.